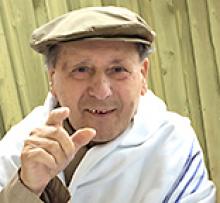 It is with heavy hearts that we announce the passing of Gerald (Gerry) Kenneth Stople in the wee hours on February 10, 2021, at the age of 92 years, with an outside temperature of -40, at Concordia Place.
He was predeceased by his wife Jean, parents, Donald and Lydia, and sister Valma Mulder. He is survived by daughters, Kathy and Tracy, and granddaughters, Sabrina and Chantal.
Dad was born and raised in Winnipeg. He started his career as a truck driver then joined General Motors in 1955 and worked at their 1345 Redwood Avenue warehouse until his retirement in 1994. He was noted for his generosity at work as he volunteered on many social committees and especially enjoyed planning and filming the GM's children's Christmas party which included rides around the warehouse with Santa Claus. Dad met Mom on a bowling league and married on July 15, 1961. After the wedding, they moved into their newly built home at 675 Roberta Avenue in East Kildonan. In the 1970s, he participated in the Canoe-a-thon on Father's Day which later became the Manitoba Marathon.
In the early 1970s, our Mom was diagnosed with Schizophrenia and he stayed by her side and helped her out as much as he could. He was a devoted father and an animal lover. He was a big fan of the Jets and loved butter tarts. His greeting to people was a closed fist touch with the words "bang, bang".
Due to COVID, a memorial service will be held at a later date.
If so moved, donations may be made to The Stople Hope Fund c/o The Winnipeg Foundation, 204-944-9474, www.wpgfdn.org. This fund was set up to provide modest assistance to persons living with Schizophrenia or Schizoeffective Disorder so that they may participate more fully in community life.