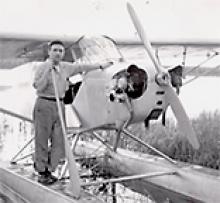 It is with sadness that we announce the passing of Grant Hambley on Monday, March 8, 2021. Grant died peacefully at the Golden West Centennial Lodge in Winnipeg and the family would like to extend their sincere thanks to all of the staff and care workers at Golden West for making his time there safe and comfortable.
Grant was predeceased by his wife Joan (nee Birnie) in October of 1996 and his brother Barry in April of 1997. He is survived by his three sons, Vern (Lila), Ron (Brenda) and Allan (Wendy) and by four grandchildren, Eric, Jillian, Janina and Christopher, and by his sister Ruth Breckman.
Grant was born on July 11, 1929 in Sidney, Manitoba. His father, George, was a minister for the United Church and the family moved around Southern Manitoba from small town to small town. He received his post-secondary education at the University of Manitoba and began a career as a hard rock geologist in Northern Manitoba, first with the Hudson's Bay Mining and Smelting company in Flin Flon, and then with INCO in Thompson in 1955. Grant and his wife Joan were part of the early pioneers in this northern city. Joan, a recent nursing graduate from Saskatoon was working at the Flin Flon Hospital where she met Grant. They were married and she relocated to Thompson in 1958 to become the town's first nurse. Together they raised three boys and watched the town grow into the "Hub of the North" and the city it is today. Grant was transferred to Winnipeg in 1980 as a regional geologist and retired from INCO in 1984.
Grant's passion was aviation, and his favourite pastime was flying in his vintage 1946 J-3 Piper Cub airplane throughout the North. It was on one of his flights that he discovered the spot on nearby Paint Lake where he eventually built the family cottage. The cottage was a fly-in/boat-in- only summer retreat for the Hambley's for many years.
After retiring he became seriously involved with the Western Canadian Aviation Museum in Winnipeg. He worked for many years assisting in the reconstruction of vintage aircraft as well as guiding tour groups through the museum and finally serving on the board of directors. He was also involved in the local amateur music scene where he played the trumpet in a local symphonic band.
Arrangements are in the care of Neil Bardal Funeral Home and Grant's wishes for cremation have been followed.
The family is planning a Celebration of Life in the coming months when gatherings are once again safe.