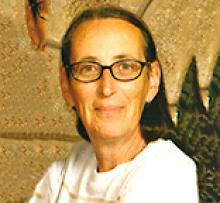 It is with great sadness that the family of Theresa Ruddock announces her passing in the early hours on Tuesday, March 9, 2021, at Riverview Health Centre.
Theresa will be missed by her husband of 48 years, Donald; her children, Donald Jr. (Dawn) and Kelly (Chris); grandchildren, Brendin, Jason, Cameron, Ryan and Emma; as well as her brothers, sisters-in-law, brother-in-law, nieces, nephews, and friends, and especially long-time friends and neighbours Doug and Karen. Theresa was predeceased by her parents, Barbara and Sydney Spence; sister Debbie; mother and father-in-law Dorothy and Arthur Ruddock; brother-in-law Brian, and nephew Stuart.
Theresa was born on July 27, 1949 in Winnipeg where she lived almost all of her life in the Elmwood area. Theresa went to George IV School and then Elmwood High School. She worked for Eaton's for 26 years followed by a few years at a doctor's office, and then seven years at Superstore in the deli department before retiring. Theresa loved watching sports and could argue sports trivia with anyone who tried to challenge her. She was a huge Winnipeg Blue Bombers fan and Montreal Canadiens fan. Theresa enjoyed spending time watching movies, TV shows, sitting in the backyard around the fire pit, and spending time with family.
Theresa received her cancer diagnosis in July 2020 which she faced with a feisty determination to beat it. In everything Theresa did, she did with a strong will and positive attitude, always thinking about others before herself. The family would like to thank all of the wonderful caregivers we have met along the way at CancerCare, Dr. Green and Alisha; the Palliative Care team, especially Visiting Nurse Anita, as well as the staff at Riverview Health Centre where she spent her last couple of weeks.
A Celebration of Life will be planned for a future date.
In lieu of flowers, please consider a donation to CancerCare Manitoba.