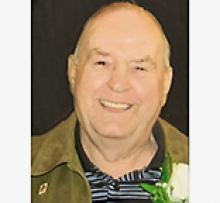 Peacefully on Tuesday, March 30, 2021, Allan B. Smith passed away in Winnipeg, Manitoba at the Deer Lodge Centre.
He is survived by his wife of 70 years, Mona; daughter Carol (Frank) Taylor and son Stephen (Deborah) Smith; grandchildren, Kimberly (Russell) McKenzie, Andrea (Ryan) Smith, Lauren (Scott) Konig, Kolin (Renee) Smith and Marcus (Hartley) Smith; great-grandchildren, Katelyn, Taylor and Ryan McKenzie, Jacob, Connor and Noah Smith, Cruz and Cal Konig, Ezekiel, Cosette, Ezra and Margot Smith. He was predeceased by his son Michael Smith. He will be deeply missed forever and always.
A private family service will be held at Brookside Cemetery.
In lieu of flowers, donations may be made in Allan's memory to the Army, Navy and Air Force Veterans in Canada, 3584 Portage Avenue, Winnipeg, MB R3K 0Z8.