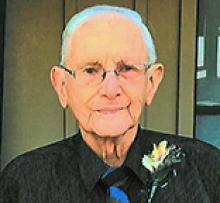 It is with deep sadness that we announce the sudden passing of Ed Lewis, just one week after his 95 birthday.
He leaves behind his cherished best friend and wife of 67 years, Pat; his children, Cathy (Bill) Skyhar and Jim (Barbara) Lewis; son-in-law Steve Snyder, brother-in-law Les Green; grandchildren, Tammy (Mike) and Chris (Naomi); and six great-grandchildren. Ed will also be missed by his brother-in-law and lifelong friend, Glenn Brown, as well as many other relatives and friends.
Ed was predeceased by his parents, Lew and Myrtle; his sister Shirley, his sister-in-law Fran, his daughter Donna, and his great-grandson Collin.
Born and raised on a farm east of Sperling MB, Ed was forced to grow up quickly as his father passed away when Ed was 13 years old. His mother worked hard to keep the farm going, until Ed was able to take it over. Linda Scott and Neil Siemens were foster children who stayed with the family through some of those years. Through difficult times, Ed still managed to attend the University of Manitoba and obtain his Diploma in Agriculture.
In 1953, Ed and Pat were married and raised their three children on the Sperling homestead and later in the Homewood area. When they retired from farming, they built a retirement home in the country and then later moved into Carman.
Work ethic was built into Ed through his farming career and this carried through to retirement. For the first ten years into retirement, Ed took care of their large acreage and cut and chopped wood to feed a wood stove that would heat the house all winter. He always said he only needed one match per year! After moving into Carman, taking care of the long hedge along their property was his pride and joy. In addition, for many years, he walked to the post office and back for some exercise.
Even with his work ethic, Ed always took time for family. Summer vacations were usually packed into the break between baling and swathing. He and Pat also travelled further afield, with a honeymoon trip to Florida, a world's fair trip to Montreal, and numerous vacations to the east coast, Arizona, Hawaii, Caribbean cruises, etc.
Ed also made some unique family entries into the Sperling parade, such as a five seat bicycle and barrels for the family to wear.
Ed was also known for his sense of humour. He'd always have a joke or an old saying or limerick to brighten up the day. Ed and Pat always loved to play cards, with 500 and cribbage being his favourites.
Our family would like to extend our heartfelt thanks to the friends, relatives and neighbours who assisted Ed in the last few years of retirement.
Due to the Covid-19 restrictions, a private service with invitations only will be followed by interment at Sperling Cemetery.
Flowers are gratefully declined. If so desired, a donation in Ed's memory can be made to the Carman United Church or the Heart & Stroke Foundation of Manitoba.