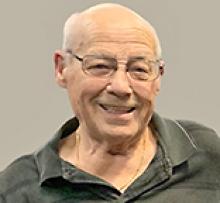 On April 25, beloved husband, Dad, Pepère passed away peacefully. While we are deeply saddened by our loss, we are left with wonderful memories of a much-loved man.
He leaves to mourn his beloved wife of 61 years, Jacqueline (née Gauthier), his daughters, Colette Wilson (Tom), Joanne Dhingra (Ajay) and Lucille Petkau (James).
Pepère also leaves his cherished grandchildren, Colin (Stéphanie), Samantha (Nolan), Adam (Natasha), David (Kayla), Renée (Jarred), Samiah (Alfredo), Rachel and Allison. He was also blessed with four great-grandchildren, Turi, Romy, Zacharias and Tyson.
Henri was born and raised in La Salle, the youngest of his siblings. He was predeceased by his parents, Pierre and Yvonne: his siblings, Jeanne (George), Rita (Albert), Gabriel (Florence) and Ernestine (Gérard).
He leaves to mourn his sister-in-law Tilly and brother-in-law John (Terry). He was predeceased by Jerome, Jacques and Bernice Gauthier.
He leaves many beloved cousins, nieces, nephews, and friends; some of whom he had a very special bond with.
Henri attended school at Otterburne College where he picked up his lifelong love of sports, in particular baseball and hockey.
Henri was always a hard-working man. He helped work the farm with his uncles and held various jobs until he co-founded his own business ABC Fire & Safety Equipment Ltd.
Throughout his life, Henri's actions were guided by his strong Roman Catholic values. He believed in serving his community. He was a proud member of the Knights of Columbus and progressed to the highest rank - 4th degree. Le Festival du Voyageur was particularly close to his heart as he loved celebrating his Franco-Manitobain roots and he donated much his of time to this event.
Henri instilled so many great values in all his children and grandchildren. He led a life of honesty, hard work and integrity all while not taking life too seriously. It would be fair, however, to question his honesty if you ever played cards with him. His competitive spirit often took control. It would not be uncommon for Henri to revisit any in-game controversies for years.
Henri also had a legendary sense of humour that will truly stand the test of time. There were few meals or get-togethers that didn't feature one of his signature eye rolls or infamous sayings for every moment. He also made up many affectionate and some not-so-affectionate nicknames for his grandchildren that they will cherish always.
Henri's happy place was always in nature. He bought a hobby farm that he named Rhinestone Ranch and enjoyed "homesteading" with family and friends. Later, the cottage on Pinawa Bay, that he so generously built for his family - a place where everyone would come together. You could always find Henri singing to himself (or the dog) in his garden, in the garage or sleeping in his chair while "watching" the Jays or the Jets on TV. It wouldn't be a morning at the lake without Henri emerging out of the bathroom after his hour-long beauty routine, looking sharp as ever and heckling the last one out of bed with his classic "Good afternoon". He was someone you could always rely on, someone that would drop anything to help if he was needed. There was no paint job, woodworking project, or happy hour he wasn't up for.
Henri was a very social man and always knew how to make people feel welcome. Anyone who came by the cottage was offered a tour of the garden followed by a drink and a chat in the garage. It was often in those talks where you felt time was standing still and so comforted by his presence even if you were doing all the talking - he was such a great listener. For those close to Henri, those moments will be missed most.
Henri will be greatly missed but never forgotten. He created a joie-de-vivre and loving culture that will live on in his family and those that love him forever. Repose en paix Henri, Dad, Pepère. On t'aime beaucoup!
We will honour Henri's life at a later date when we can safely get together.
The family is immensely grateful for the care and compassion provided by the staff in the Palliative Care Unit at St. Boniface Hospital. Please consider donating to these heroes who provide so much comfort at the end of life.