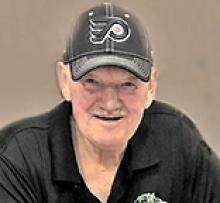 It is with great sadness the family of Jim Johnson announces his sudden passing on Tuesday, May 4, 2021.
Jim will be lovingly remembered by his wife Marlys, and his children, Shellie (Jim) Anderson, Jay (Deanna), and Tara (Greg) Smith. Bub will be fondly remembered and incredibly missed by his grandchildren, Owen and Aubrey. He will also be missed by his grandchildren in California, Jason and Keeley and their families, by his sisters, Mary (John) Hydomako, Audrey (Tony) Gmitrowski, Ruth Neskar and Kathy Smolinski. Jim will also be forever remembered by his numerous nieces and nephews, extended family, and dear friends.
Jim was predeceased by his parents (Norman and Thelma), and numerous aunts and uncles, and members of his hockey community. In 2000, Jim lost his youngest son, Kyle, in a tragic accident at the age of 19. Jim has spent the years since with his family by his side honouring Kyle's memory by giving back to the Transcona Community. The family takes comfort knowing Jimmy and Kyle are finally together again.
Besides his family and friends, Jim's other love was hockey. Even though he grew up in Tyndall, he often could be seen hitchhiking his way to his games in Winnipeg. Jimmy's professional hockey career began in the New York Rangers system in 1962. He toiled between the NHL, CPHL and AHL until he made his debut with the Philadelphia Flyers in 1967, and he never looked back. He finished his NHL playing days with LA Kings in the 1971-72 season, and began his WHA career in 1972 where he played for the next three years for he Minnesota Fighting Saints, and ended his playing days with the Indianapolis Racers.
After his playing days, he returned to Transcona and opened his first sporting goods store on Bond at Melrose Street. Jim Johnson's Sports Centre became a staple in Transcona with its most notable location on Pandora Ave. Jimmy's love of hockey continued from playing to coaching where he spent many years pacing hockey benches, teaching and mentoring many young and old hockey players and parents.
After selling his store he started up Jim Johnson's Trucking, where family thinks he spent more time visiting than actual business. After 30 years he officially retired. In his later years you could always find Jimmy at East End Arena watching his grandchildren play the game he loved and offering advice to anyone that asked.
The family would like to thank the Winnipeg Fire and Paramedics, and St. Boniface Hospital for their efforts.
A private family interment will take place. At a later date a celebration of Jimmy's life will be held.
In lieu of flowers, those who so desire may make a memorial donation in memory of Jim to the Kyle Johnson Memorial Foundation at The Winnipeg Foundation.