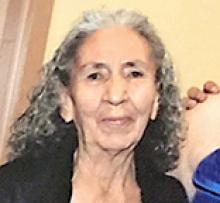 It is with great sadness we announce the passing of our Mother, Grandmother, Sister, Aunt and Friend, Dorothy Skeet.
Dorothy was predeceased by her husband John Skeet, parents, Albert and Agnes Linklater, as well as daughter-in-law Beverly Mulholland.
Dorothy was a funny, sweet, kind and fiesty lady who made many friends during her life. Dorothy enjoyed many hobbies but her favourite was cooking. Dorothy's catering was popular in the community for public functions / events. Her Bannock, Bannock Burgers and Indian tacos were her signature trait in Sagkeeng.
Dorothy leaves behind to cherish her memory surviving brother John Linklater; son Robert Mulholland Sr.; daughters, Celine Fontaine, Ruby Swampy (Adrian, Desiree, Ashley / Nick), Patricia Crofton (Marvin) and Cheryl Height (Kelly). Children she helped raise: grandson Robert Mulholland Jr., Dion Boubard (Debbie); granddaughters, Daphonie Starr (Brad), Melanie Mulholland (Dennis), Robyn Kent (Chris); granddaughter Cyara Bird (Gabe); special great-grandchildren, Ernest Mulholland and Christina Guimond; best friend/sister Hilda Canard; as well as many grandchildren, great-grandchildren up to four generations, nieces, nephews and friends.
Wake services will begin Thursday, June 17, 2021 at her residence in Fort Alexander for two nights. Funeral service will be held Saturday, June 19, 2021 at 2:00 p.m. Officiated by Richard and Nancy Bruyere at the Anglican Church in Fort Alexander.
Pallbearers are her grandsons, Clayton Mcpherson, Adrian Swampy, Matthew Boubard, Ernest Mulholland, John Mulholland and Felix Guimond. Honorary Pallbearers, Christina Guimond and Gordon Bushie.
The family would like to thank Dr. Abisheva for the years she took care of Dorothy; as well as the staff of Pine Falls Hospital for the kind, compassionate care given in Dorothy's final days. Family would also like to thank Ivy Canard, Hilda Canard, Donna Sais and the traditional healing centre for accommodation through Dorothy's end of life care. Thank you to others who gracefully and generously helped/donated towards Dorothy and to Sagkeeng Chief and Council.