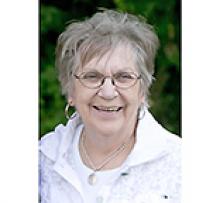 Lorraine passed away peacefully at the age of 85, on June 14, 2021, at Carman Memorial Hospital, Carman, Manitoba.
She will be greatly missed by the love of her life, and husband of 63 years, Lorne Fife, her three children, Glenn Fife (Rita), Linda Richardson (Joe), Pat Sharples (Jordan), eight grandchildren, Brett (Apple), Anthony (Tracey), Tiffany (Mike), Beau (Kelly), Brittany (Andre), Jay (Kari), Lisa (Reece), and Kiara. Mom had 13 great-grandchildren, Rylan, Ainsley, Hunter, Avery, Emersyn, Landon, Raven, Kinsley, Riley, Paisleigh, Kylie, David and Brooks. Mom will also be missed by her brother Bill Moffat, sisters-in-law, brothers-in-law and numerous nieces and nephews.
She is predeceased by her parents, Olive and Ernie Moffat, her mother and father-in-law, Lawrence and Violet Fife, sister Tannis Hill, brother Bryan Moffat, brothers-in-law, Norm Mason, Ken Fife, Robert Fife, Cale Burns and Rob Hill, sisters-in-law, Mabel Fulton, Jan Fife, Elaine Fenske and Grace Moffat and nephew Gordie Moffat.
Mom was born and raised in Souris, MB and after finishing school, she moved to Winnipeg. Mom worked for the Manitoba Telephone System where she met Catherine Fleming (dad's sister) who introduced them. They were married at Greenwood United Church, Winnipeg, MB on October 12, 1957. In 1965, they moved with their three little kids and bought a farm in Myrtle, MB where they lived until they retired and built a house in Roland. In 2006, they moved to Morden where they lived for 10 years then moved to Carman in 2016, to be closer to family.
Mom was a very active member of the communities that she lived in and was a member in all of the Women's Church groups in Myrtle, Roland and Morden. Mom was an awesome pianist and soloist and used to play and sing at church and at funerals. She was a choir leader, piano teacher and a CGIT Leader. When Mom lived in Roland, she was the secretary for the Roland United Church and worked part-time at the Roland Post Office.
Mom and dad did some traveling in their 63 years together but their greatest love was spending time with their families. Mom's little brother Bryan who had Down Syndrome, had a very special place in her heart. Bryan spent every holiday and as much time with them as he could. A few of Bryan's roommates didn't have places to go for a vacation, so mom's door was always open for the three of them to come spend time at the farm for their summer vacation. One of mom's biggest joys was all of her grandchildren. If mom wasn't playing cards and games with her grandkids while they had sleepovers, you could find her in the kitchen baking with them, teaching them how to sew and make crafts. Mom got the pleasure of enjoying all of her great-grandchildren. Moms 13th great-grandchild was born on June 10, and although she did not get to meet him in person and hold him, she had the pleasure of meeting him over FaceTime.
Mom was loved by everyone who knew her. She made lasting friendships wherever she went and will be greatly missed by family and friends.
A private family service will be held at the Myrtle Cemetery at a later date.
In lieu of flowers, donations maybe made to the Kidney Foundation of Canada - Manitoba Branch, 452 Dovercourt Drive Unit 1, Winnipeg, MB R3Y 1G4 or to the Manitoba Down Syndrome Society, 204-825 Sherbrook Street, Winnipeg, MB R3A 1M5.