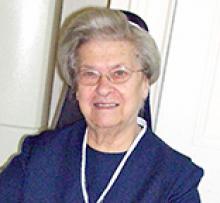 Sr. Marianne Telenko passed away peacefully with her sister, Sr. Elicia Telenko, Sr. Andrea and caregiver Maria by her side on June 30, 2021, at Bethany Home in Winnipeg, Manitoba. She was 96 years old, with 76 years in religious life.
Olha was born on August 6, 1924, to John Telenko and Katherine (nee Rakobowchuk). Her parents immigrated from Ukraine, met in Montreal and married in 1911. Olha had four sisters and six brothers. Her faith filled-family was very involved in the Montreal Ukrainian Catholic community. She was educated by the Sisters Servants of Mary Immaculate in her early years and later by the Sisters of the Holy Cross. When her brothers were drafted to military service, Marianne knew that she too was called to serve. She found another way of service after her pastor suggested she enter religious life. In 1945 Olha entered the Sisters Servants' congregation in Mundare, AB, taking the name Marianne in honour of Jesus' mother and grandmother. A few years later, her younger sister Anne, also entered the congregation, taking the name, Sister Elicia.
Sister Marianne loved people of all ages. Her primary ministry was in education, teaching in Detroit, MI and Youngstown, OH, and in Winnipeg (St. Nicholas School), Ituna, Oshawa and Yorkton (Sacred Heart Academy).
A missionary at heart, she taught catechism at Ukrainian parishes in Toronto, Saskatoon, Regina and Prince Albert. Her summers were spent teaching parish and camp catechism throughout rural Alberta, Saskatchewan, Manitoba and Ontario.
Sr. Marianne used her clerical talents to serve in Yorkton, Toronto, Dauphin and Ancaster, where she also coordinated retreat bookings, being available for retreatants and their needs. Her warm heart and easy-going nature were her hallmarks. She wholeheartedly helped with the annual Ancaster Marian Pilgrimages for many years. In 2010, she retired to Bethany Home in Winnipeg, bringing much life to the community with her peaceful spirit and accepting presence.
Family was close to Sister Marianne's heart. She often spent holidays with them. Her nieces and nephews affirm, "Beloved aunty, heartfelt thanks from all of your family and friends for providing so many treasured memories which we have been blessed to share over the years with you. The beauty of your personality and giving nature has touched many and enriched us for having had you in our lives.... you will always be in our hearts... God bless your dear soul."
Sister Marianne was predeceased by her parents, John and Katherine; brothers, Taras, Steven, Theodore (Fred), Peter, Michael and Philip; and sisters, Catherine, Rose and Mary.
She leaves to mourn her sister Sister Elicia SSMI, numerous nieces, nephews, and her SSMI family.
Sr. Marianne lived the heart of God through her gentleness, compassion, kindness and love. Throughout her life, she touched many hearts. A special thank you to each of her caregivers.
With Covid restrictions, a private service has been held.
Charitable donations may be made in her memory to SSMI Lubov Foundation-Sisters Servants of Mary Immaculate.

May the memory of
Sister Marianne be eternal
Vichnaya Pamyat