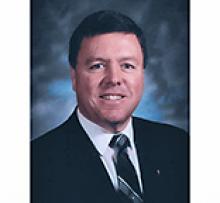 It is with profound sadness that the family of Terry Dugan announce his peaceful passing on July 16, 2021.
He was born in Winnipeg, August 24, 1947, to Herb and Betty Dugan. He was the first child of four, followed by Sherry, Rod and Geoff. He went to school in Winnipeg and graduated from Westwood High School.
He attended the University of Manitoba for seven years and graduated with B.Sc. Hon, B.Ed. and MChem. It was there that he met Joyce Williamson when they both lived in residence. They were married in 1972 and both moved to The Pas to continue their teaching careers. Their first child, Britt, was born in 1975 and Sean arrived two years later in 1977.
Terry dedicated nearly 40 years to education. He started his teaching career in Westwood High School and continued to teach many subjects over the years in The Pas. He spent some time as an administrator in the school system in Holland, MB and The Pas. His favourite subject to teach was chemistry and the last decade or so of his career was spent teaching high school chemistry students how to succeed at university. He also taught chemistry at the University College of the North. He inspired many a student to embark on their post-secondary goals, many of whom would not have moved forward without his gentle guidance, or strong push.
Terry was active in his community with his work as a member of the Kinsmen Club, as a director of Trappers Festival and a member of Theatre '53. His dramatic flair, and involvement in Trappers Festival, lead him to play the role of a crazy trapper while he emceed the stage shows for many years. He also enjoyed playing cards, especially bridge with his friends. Cards often brought out the competitive spirit in Terry, and when he had a good hand, you could count on him to start snapping his cards down in determination as he counted his tricks. His love of music manifested itself in many pursuits through his life. As a young man in high school, he played tuba in the marching band with the Winnipeg Blue Bombers. Growing up, Britt and Sean remember Terry spending countless hours with headphones on, planted in front of his turn table and cassette player, creating mixed tapes of artists ranging from Cindy Lauper to Cher, MJ, The Fab Four, the Doors, Aerosmith to Iron Butterfly. Those mixed tapes accompanied many family road trips.
He initiated the MBCI student travel club and spent many spring breaks with his students in Europe. He travelled widely with his wife and children, visiting five continents in his lifetime.
He enjoyed lake life at the cottage on Clearwater Lake where he fished, waterskied, and canoed with his family and friends. In his younger years Terry guided fishing trips, and as his children grew, he passed on his love for fishing to them by taking them on overnight fishing trips to neighbouring lakes where many adventures took place.
Terry also enjoyed the beautiful waters of the Caribbean where he learned to scuba dive in Cozumel. He and Joyce had fun at their home-away-from-home in Mexico sharing good times with family and friends and made many new lifelong friends there also. His passion for diving allowed him to visit the two largest barrier reefs in the world, in Australia and Mexico, and to experience diving with sharks and dolphins in the Bahamas.
Terry continued his love of travel after retirement in 2007. He attended his daughter Britt's wedding to Ra Kural that year in India with his wife and son and future daughter-in-law. He and his wife embarked on an around the world trip in 2009. He continued to travel even after his health started to decline and did a cruise of the Greek Islands and visited the Great Wall of China in a wheelchair.
His son Sean married Sarah Payne in 2008 and Terry's first grandson Bryce was born in July 2009. Ally followed in 2011. Britt and Ra's first baby Aria was born in 2018 and baby Cade arrived in 2020.
Terry enjoyed visits from his whole family after he moved to Golden West Centennial Lodge in 2017. He was well looked after by the caring folks at Golden West, and they made him comfortable in his final days.
As per his wishes, Terry was cremated and laid to rest on July 23, near his parents at Chapel Lawn in the Garden of Memories.
Memorial donations may be made to Diabetes Canada.