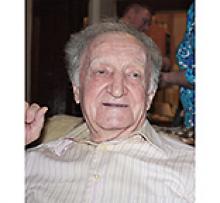 It is with immense sadness that we announce the passing of Czeslaw (Chester) Wojciech Franczyk, who passed peacefully on Sunday, August 8, 2021 at the Actionmarguerite St. Joseph's Residence in Winnipeg; he was 90 years old.
Chester was born February 13, 1931 in the town of Teklowka, Poland. As a young child and Polish deportee of the Second World War, he was sent away, first to Siberia and then Uganda where he remained for eight years. He did some work as a lumberjack in Saskatchewan and then settled in Winnipeg, Manitoba with the rest of his siblings and mother.
Chester was best known for his Sunday lunches and very proud of his gardening. He served several years with the Queen's Own Rifle of Canada as a Rifleman, Second Battalion, 1957 to 1961. Chester was also proud of his many years bartending, both at the Polish Combats' Association Club 13 and The Northern Hotel.
Chester was the last living sibling of four, predeceased by his father Wojciech Franczyk in 1942, mother Rosalia in 1987, brother Karol in 1989, brother Zdislaw in 2014 and sister Genevieve in 2020.
He leaves behind to mourn his wife of 40 years, Maria; brother-in-law Bogdan Dryjski and wife Emmie; sister-in-law Janet Franczyk; and children, Stefanie (Victoria, Peter), Thomas and wife Alexandra (Nathan, Matthew) and Adam (Jennika); as well as former wife Olga, and children, Paul, Marion and wife Kimberly (Mike, Ashley, Kimmy), Bobby, Monica (Jillian) and Jennifer (Anthony). He will be deeply missed by his family and friends and all who knew him.
A funeral service will be held at 1:00 p.m. on August 13, 2021 at the Cropo Funeral Chapel, 1442 Main Street, Winnipeg. Due to current COVID restrictions, only family will be in attendance.