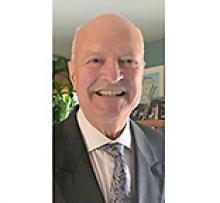 Surrounded by his loving family, Luigi Loscerbo passed away peacefully on August 14, 2021, at St. Boniface Hospital, at the age of 86 years.
He was predeceased by his parents, Costantino Loscerbo and Maria Fiorentino, brother Pasquale Loscerbo, and sister Caterina Zedda.
Luigi is survived by his wife Karen Loscerbo (nee McKenzie), children, Kenneth (Maria Elena) Loscerbo of Winnipeg, MB and Julia (Alf) Garvin of Calgary, AB; grandchildren, Amanda, Alexander and Andrew Loscerbo, and Joshua and Grace Garvin. He also leaves his brothers, Guiseppe (Romana), Gaetano (Angelina), Antonio (Irene) and Mario; sister Gaetania (Guiseppe); and numerous nieces, nephews and extended family.
Luigi was born in Amato, Catanzaro, Italy on January 22, 1935. He experienced the war as a child and loved to tell stories about soldiers camping on the family farm. He apprenticed as a carpenter until immigrating to Canada in 1953. After working several jobs in construction, he took a trade as painter and decorator and was very proud to open his own company, Bono Decorating, in 1974. Dad valued hard work and the independence he had working for himself. He was extremely entrepreneurial and knew how make a buck (also how to save a buck!). Growing up in hard times made him a genius at putting old scrap to good use.
In 1967, Mom and Dad married and were blessed quickly with two children, Ken in 1968 and 13 months later, Julia in 1970. Family was everything to Dad. He cherished the many large family gatherings with his brothers and sisters and their families. They were always loud and raucous, in the Italian family tradition, and filled with love, great food, and plenty of fun. His children and grandchildren were a source of tremendous joy and pride for him. He was at his happiest when his family was together.
Dad loved to garden and had the ability to make any small patch of land burst with flowers and vegetables. He loved to share the bounty from his garden with friends and neighbours, and he always put healthy food on the table.
Dad was a regular at the University gym for 40 years and made many long and lasting friendships there. With passing time, his workouts evolved from hard physical exercise to more social visiting. He loved to "do the rounds" with the 6:00 a.m. crowd.
The family would like to thank Dr. Fultz, nurses, Scott and Melissa, and all the kind, supportive healthcare staff at St. Boniface ICU for their compassionate care.
In lieu of flowers, donations may be sent to St. Boniface Hospital Foundation.
Mass of the Resurrection will be held on Friday, August 20 at 10:00 a.m. at St. Vital Parish, 1629 Pembina Hwy., with viewing to commence at 9:30 a.m. Interment will follow at Fort Garry Roman Catholic Cemetery at 826 Crescent Drive.