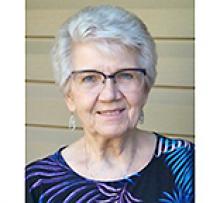 After a courageous battle against cancer, Marion Mildred Tokar, aged 78, was called home to be with her Savior on July 9, 2021, at the Riverview Medical Centre.
Born in Shevlin, Manitoba, Marion was baptized and confirmed in the Lutheran church in Shevlin, where her faith grew and her love of singing hymns was fostered.
Marion was predeceased by her parents, Albert and Lydia Nernberg; brothers, Herbie Nernberg and Dennis Nernberg; sister Marlene Fuhr; sister and brother-in-law Lorna and Paul Marshall; an infant brother; as well as brothers-in-law, Lawrence Doering, Oswald Edel and Neil Gow; sisters-in-law, Rose McLaughlin and Doreen Lozier; nephew Ronny Edel; niece Deb Edel; as well as others from her extended family.
Marion looks forward to the day when she is reunited with her husband of nearly 61 years, James Tokar; her loving daughter Maxine Tokar (Bob), son Michael Tokar (Wanda); grandchildren, Brittni, Chelsea, Shawn, and Travis, as well as great-granddaughter Ava. Also left to treasure the memory of Marion are her three sisters, Doreen Doering, Bernice Edel and Elsie Gow; as well as two brothers, Ken (Ginny) Nernberg, and Cliff (Alexa) Nernberg; brothers-in-law, John Fuhr, Jerry McLaughlin, Gordon Tokar, and Ed Koski; sister-in-law Hertha Nernberg; plus numerous nieces, nephews, and extended family.
Marion met the love of her life, James and was married at the age of 18. Life was never boring and took Marion and James on many adventures as they travelled through life. They enjoyed 60 years of marriage together before being separated due to James' health concerns. Hawaii and Mexico were favourite destinations for Marion and James, as they enjoyed the warmth, spectacular sunsets, the occasional tequila, and time spent together. Marion's grandchildren were the delight of her heart and she enjoyed spending any time she could with each of them. Her favourite memories were of reading and doing crafts with them, as well as watching the skits they so loved to perform. She cherished these moments and thought they had passed way too fast.
Marion worked at many careers, including 20 years with the Royal Bank, but was most happy at home toiling in her garden.
The funeral service for Marion will be held at 11:00 a.m. on Friday, August 27, 2021 at her home church, Beautiful Savior Lutheran Church, Winnipeg, MB. Following the service, friends and family are invited to gather in the church basement for a time of fellowship, luncheon and sharing of memories.
The Tokar family would like to thank CancerCare Manitoba and the Community Palliative Care Program for the amazing care Marion received, and the support for our family during her illness.