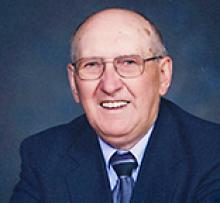 John was a great husband, father, grandfather and friend.
Born in Dominion City, Manitoba, John grew up on the farm and after his father's death, went west to BC to work to help support his family. Returning to Winnipeg, he famously met his wife, Jean Pottage, DJing at a party.
John and Jean married in 1952, and a year later had son Brad followed by Doug and then ten years later, Diane.
John's passion, besides his family, was his work railroading. He started with the CPR as a wiper on the steam engines, a hostler, a fireman and finally, an engineer. Being out in the countryside, the companionship and always moving down the tracks.
He continued his love of trains into retirement becoming President of the CPR Pensioners and President of the Prairie Dog Central. John was also the Local Chairman for the Locomotive Engineers (Division 76), drove for CancerCare and Meals on Wheels and delivered food for the St. Matthews Community Ministry. He was also a Mason.
For all of his volunteerism, John was awarded the Governor General's Caring Canadian Award in 2001 by Adrienne Clarkson.
He enjoyed faith and friendship at his Church, Silver Heights United. He was a member of the choir and spent many hours volunteering his time keeping the Church "ship shape" and participating in fundraisers.
John and Jean always enjoyed their leisure time taking road trips and camping with family and friends and later, trips overseas, cruises and trips down south.
John was predeceased by Jean in 2019 and is survived by his sister Martha "Butch" and her husband Laurie, children; Brad (Wendy), Doug (Carina), and Diane (Rob). His grandchildren, Megan (Jeff), Laura (Robert), Kaitlin (Trevor), Colin, Gabriella, Roland, Randy (Judith), Devin, and Hailey, six great-grandchildren and many nieces and nephews. He will be missed by many friends.
Thank you to the amazing staff at Calvary Place Personal Care Home for John's wonderful care these past seven months.
In lieu of flowers, please consider a donation to Calvary Place Personal Care Home.
A private family service will be held at Neil Bardal Funeral Centre on Monday, August 30, 2021 at 11:00am.
The service will be live-streamed and available to view on John's obituary page at www.neilbardalinc.com. It will remain available on the website to watch at a later date.