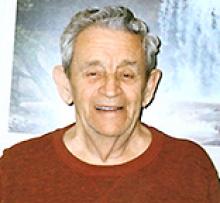 Ronald Edward Allen, the son of Edward and Maude Rita Allen, passed away on August 21, 2021, after a battle with stage four cancer. He was 87 years of age.
Described as having a good sense of humour, Ron always wanted to live his life as fully as possible. He had a dry wit that often made people pause before responding with a hearty laugh.
Ron lived to serve others, often helping wherever he could. He always made time to speak with people, enjoyed going for walks with his neighbour, Charles Wells, and had a servant heart. Ron's wife, Sharon, would often come home to find her grass freshly cut and Ron waiting for her on her front step, even while they were just friends.
Though he met Sharon later in life - Sharon was in her 60s and Ron, 72 - the day they wed was one of his happiest days. He proposed in 2008 while on holiday to visit Sharon, promising to always look after her and live a life together. Sharon describes Ron as her rock, someone who was always there for her.
Ron loved the simple life and avoided what he called "flash." He worked for Winnipeg Hydro for many years and loved to go for long drives, walks and picnics in the park with his wife, no matter the weather. He was an avid cribbage player and loved bowling and horseshoes. During COVID-19 lockdowns, Sharon and Ron would often do puzzles together to pass the time, a hobby that he introduced Sharon to.
Sharon is grateful to the staff at St. Boniface for making her husband's final days so comfortable and for their excellent care.
Ron's parents, three sisters - named Dorothy, Irene and Rita - and in-laws, Bill, Evelyn (Paul), Doug, Ruth, and Kenny, who passed before him. He is survived by his wife; his son Brooks (Wanda); grandchildren, Ashley and Steven; great-grandchildren, Dakota, Joshua, Nathan, Michaela and Quinton; and in-laws, Doreen, Donald, Lenore (Ray), Brenda (Dana), Kevin (Lorie), Art (Shirley), David (Brenda); and children-by-marriage, Lisa and Kevin, and Lorie and Wally; sisters-in-law, Olivia and Anna; and special friends, Irene and Fred.