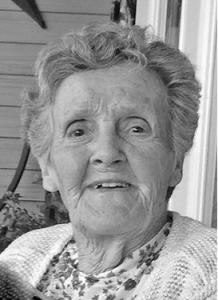 GOODWILL: Joan Wilson Goodwill (nee Torrance) was born January 3, 1935 on the farm 6 miles south of Griswold where she lived along with her father George Sr., mother Jessie (Durston), older brother John and younger brother George Jr. At the age of eight years old in 1943, her mother passed away. Joan and her brothers had to take on added chores and responsibilities. Joan, with the help of her younger brother George, became the homemaker. She started her schooling at Hillsdale School and completed her formal education at Griswold, often boarding with aunts and uncles during the winter months. In 1947, the family moved one mile south to the Torrance home farm. In 1954, Joan met her future husband, John Goodwill, and they married on Nov. 1st, 1955 at the Carter farm near Kenton. They lived in Brandon for nine years where she worked for a brief time until they started a family. Sons, Joe, Dennis, Robert and Donald, were born in Brandon. In April 1964, they moved to the Goodwill home farm, NW of Souris, which she called home for the next 50 years. After moving to the farm, two more children were born, Alan and Laurie. Finally, a girl! Joan was a very hard working mother, farmer, wife and friend. Her life on the farm was busy feeding, clothing, caring for her family, and teaching them to cook, clean, iron, sew and take care of the garden and chickens. She skillfully guided her six children through school and off into the world, for her efforts she was rewarded with twelve grandchildren and seven great-grandchildren whom she loved dearly. She was an excellent gardener, loved to spend time in her big garden and enjoyed sharing her fresh produce with family and friends. She was involved in community activities including 4-H, palliative care, Ag Society, curling, and Legion Auxiliary. She was also passionate about donating to local projects and just as passionate about it being anonymous. As her children moved away for work and education, she took on more farm duties including piloting the combine and grain truck. Joan also enjoyed working along with John providing wagon and sleigh rides for community and family events. After John's passing in 2007, she continued to live on the farm, and care for the yard and garden until moving to a condo in Souris in 2014. A few years later, with some encouragement, she purchased her first "new" car and then moved into her final and first "new" home where she enjoyed keeping track of the activities at the shops across the street! Joan worked hard to stay connected with her family traveling across Canada and into the US to attend graduations, birthdays, anniversaries and other celebrations or just for a visit. She even purchased a motorhome just to be able to take the family on trips. Over the years, she formed many lifelong friendships which she deeply appreciated, enjoying many adventures including traveling to New York City for a girls' trip. After a series of surgeries and setbacks, she bravely took control of her destiny and went home from the hospital. She spent her final weeks enjoying life surrounded by family and friends. She passed away peacefully at her home in Souris on August 30, 2021. She was predeceased by her husband, John, brother, John, and daughters-in-law, Janice and
Cheryl. She is survived by her brother George; sons Joe (Lynn), Dennis, Robert (Shawn), Donald (Beth), and Alan; daughter Laurie (Richard); grandchildren Jessie, Stephanie (Ripley), Chelsea, Ben (Kelsey), Hannah (Alissa), Clifford, Vanessa, Nicolas (Madi), Gloria (Kurtis), David (Stacey), Kevin (Kayla) and Ryan; great-grandchildren Violet, Griffin, Roslyn, Sarah, Ava, Harper and Khaliya and numerous nieces and nephews.
A celebration of Joan's life was held at the Souris & Glenwood Cemetery on Saturday, September 4, 2021. In memory of Joan, donations may be made to the Souris Hospital Palliative Care Fund c/o Prairie Mountain Health Box 10 Souris, Manitoba R0K 2C0 or to the Souris Agricultural Society Box 1383 Souris, Manitoba R0K 2C0 or to a charity of your choice. Messages on condolences may be made at www.kowalchuks.net .