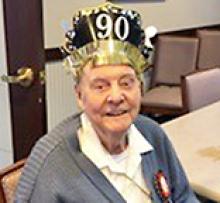 It is with deep sadness that we announce the passing of Peter Norman Penton on June 12, 2020 at Riverview Health Centre in Winnipeg, Manitoba. Peter was 90 years old.
Peter lived in Winnipeg his entire life except for a brief stay in California in the 1950s. He leaves behind, his beloved wife Joanna; his sister Gloria Penton (Sideen); his children, Debbie (Bob), Tom (Maryann) and Jim; grandchildren, Jennifer (Brendan), Stephen (Luisa), Shawna (Rene), Betheni and Michael; stepchildren, Janice (Darrel), Jeff (Linda), Derek (MaryAnn); step-grandchildren, Corey, Christopher, Michael (Andrea), Chantelle (Justin), Nikki (Erick), six great-grandchildren, five step-great-grandchildren; as well as numerous nephews and friends.
Peter was predeceased by his first wife Constance, father Charles, mother Dorothy and brother Bazil.
Peter spent his entire 40-year career working with the Canadian National Railway starting as a call boy at the age of 16, moving up to fireman, and then locomotive engineer by the time he was just 28 years old. He had a passion for his work and developed countless friendships during his service with the CNR. He retired at the tender age of 57 and was able to spend his retirement relaxing and travelling with his wife Joanna. He loved to take long walks with his dogs and enjoyed taking afternoon drives through the Manitoba countryside with Joanna.
A colourful and Jovial man, Peter will be missed dearly and remain in our hearts forever.
Funeral service, interment and reception will be held at 2:00 p.m., Thursday, September 23, 2021 at Chapel Lawn Funeral Home and Cemetery, 4000 Portage Avenue, Winnipeg, Manitoba, R3K 1W3.