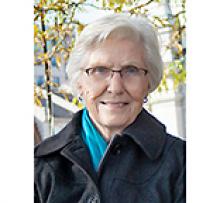 We announce the passing of Esther Kretchmer at her residence on Sunday, September 19, 2021, in Lac du Bonnet, Manitoba at the age of 90, following a brief struggle with cancer.
She is lovingly remembered by son Tim (Wanda), daughters, Lori (Dave) and Diana; five grandchildren; five great-grandchildren; one stepbrother; one sister-in-law; nieces, nephews, friends and neighbours.
Esther was predeceased by her parents, eight siblings, seven brothers-in-law, four sisters-in-law and her husband Walter who passed away in 2011.
Thank you to Dr. Bruneau, Dr. Liu from CancerCare Manitoba, the Lac du Bonnet palliative and nursing staff for their compassionate and professional care to Mom.
A funeral service for Esther Kretchmer was held on Thursday, September 23, 2021 at Whiteshell Baptist Church in Seven Sisters Falls, Manitoba. A private family interment at the church cemetery preceded the service with Pastor Craig Glen officiating both.
Flowers are gratefully declined. If friends so desire, donations can be made in Esther's memory to Camp Nutimik, 2021 Capital Project, Box 35040 RPO Henderson, Winnipeg, MB, R2K 4J9 or to a charity of one's choice.