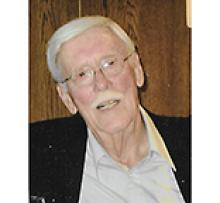 It is with heavy hearts that we had to say goodbye to our beloved husband, father, grandfather and great-grandfather on September 18, 2021 at the age of 90, surrounded by his family. Jim passed away six days after his 68th wedding anniversary to Jenny.
Left to cherish his memory is his wife Jenny; sons, Michael (Sandra) and Robert (Caroline); sisters, Doris (Larry) of London, England and Eva (Mel) of Whitehorse, Yukon; grandchildren, Kolby (Rachel) of Australia, Karly, Kelsey (Shane), Benjamin; and great-grandchild Eli Enns.
Jim was born in Winnipeg to James Henry Blundell and Grace Mildred Snider and lived his entire life in West Kildonan. Jim was always involved in sports. During his high school days, he was the suburban and Provincial Champ of the 100 and 200 yard dash. Sundays were spent playing football with friends at Kildonan Park.
Jim married his high school sweetheart Jenny in 1953. Shortly after the two boys came to join them, Michael and Robert (Bo). When his boys started to play sports, whether it was baseball or hockey, he was extremely proud of them, driving them to early morning practices and travelling to tournaments. Jim and Jenny spent 50 years at their cottage in Sandy Hook, giving the boys many enjoyable summers. Jim also gave of his time to the Sandy Hook Community Club. Jim and Jenny travelled extensively including Canada (including Yukon), USA, UK and Australia.
Jim worked for the Winnipeg Police Service for 30 years, retiring as Sergeant. He received the Life Saving Award from the Red Cross, the Winnipeg Police Exemplary Service Medal and the Winnipeg Police Long Service Medal. He received awards from the WKMCC for ten years of service and from the Raiders Junior Hockey Club.
Jim had many health issues over the years, but he always faced them with dignity, courage and a sense of humour. His latter days were spent at the Luther Home, Personal Care Home.
As per his wishes there will be no service.
Cremation has taken place and a private internment will take place at a later date.
In lieu of flowers, please give to a charity of your choice.

For online condolences or to light a
memorial candle please log on to
www.mosaicfunerals.ca