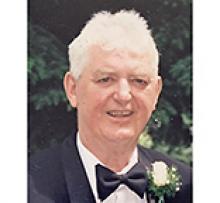 It is with heavy hearts that we announce the passing of Michael Francis Whelan just shy of his 83rd birthday.
Our Dad has joined our mom, Ruth, after seven years of missing her. He will be deeply missed by children, Colin, Sean (Nancy), Shannon (Bram); and grandchildren, Sophie, Leif, Quinn, Drew, Neve and Ella. Also left to remember him are his siblings, Maureen and Collie (Rita); sisters-in-law, Ruth, Red, Lucille (Bud) and Bea, and a great many nephews, nieces, cousins and wonderful friends. Dad was predeceased by his parents, Mary and Michael; sisters, Monica and Teresa; brothers, Liam, Aiden and Desmond; and many sisters and brothers-in-law.
Born in Alliston, Ontario on October 11, 1938, he was the seventh of eight children. As a child, he was always found with either a hockey, lacrosse stick or baseball bat in his hands. He dropped them only for school, serving as an altar boy or for his beloved family pets (stray dogs he brought home). He excelled at sports and as a young man was invited to the New York Rangers goalie camp. He was inducted into the Canadian Lacrosse Hall of Fame as part of the Brampton Excelsiors team. On the advice of his older siblings, he eventually fulfilled his destiny and enrolled in teachers college.
Following several years of teaching, he was white knuckled on his first plane ride destined for Germany to teach kids at a Canadian army base. There he made lifelong friends, travelled extensively, still managed to play sports, but most importantly met the love of his life, marrying fellow teacher, Ruth Hanke.
They returned to Canada first living in Toronto, then after Colin was born, spent several years in Kincardine, Ontario where dad held a vice-principal position. Soon Sean and Shannon were born and they were a family of five. After a few years of enjoying the beaches of Lake Huron, they moved to Neepawa for a life on the open prairies and to be closer to Ruth's family.
First teaching at JM Young, Eden, MB, and then on to Neepawa Area Collegiate Institute, Dad spent over two decades making lifelong friends and lasting impressions on the thousands of students who were fortunate enough to call him Mr. Whelan or Coach. Dad was fully engaged in coaching sports, any sport, even coaching into the summer with his Westman Summer Games teams. He opened the gym at 7:00 a.m. Monday through Friday all school year to coach half-awake junior high kids whichever sport was in season.
He was known for connecting easily with all students, teaching with humour and storytelling, and heavily favouring certain outfits. He always told us he felt lucky to wake up every morning loving what he did.
In his 25 years of semi-retirement (Dad was a beloved substitute teacher at HMK and JM Young still last year), he picked up another stick being the first on the golf course most summer mornings. In the winter Dad was found cheering on the Natives/Titans, selling tickets to support them or tutoring many players to prepare for their SAT's. He also loved all the trips Ruth booked to visit grandkids, attend destination weddings, see the Blue Jays play, or attend curling bonspiels and she even got him back on many planes. During retirement, he perfected his poetry, wrote songs to the tune of Delta Dawn, and became a homemade card creator extraordinaire!
His faith was his rock. From early days as an altar boy to teaching confirmation for over 40 years, he was a devout Catholic throughout his life, seldom missing weekly Mass. His faith lifted him through challenging times, and we know has now lifted him up to heaven to be with Ruth.
Our Dad was an amazing husband, father, grandpa, friend, teacher, mentor, role model and was Uncle Mike to many; always interested, always listening, always selfless, always caring.
The family wants to thank all those who've reached out to us during this difficult time and the medical team who supported dad over the past few months, especially Dr. Kerr and the SICU.
Mass will take place, with ONLY LIMITED SEATING IN ACCORDANCE WITH COVID 19 RULES, at 1:00 p.m. on Thursday, October 7 at St. Dominic's Roman Catholic Church on 1st Avenue in Neepawa, MB. Interment will following at Riverside Cemetery.
In lieu of flowers, donations can be made to CancerCare Manitoba , 675 McDermot Avenue, Winnipeg, MB R3E 0V9.