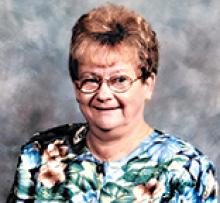 It is with heavy hearts we announce the peaceful passing of our wife, mother, grandmother, and great-grandmother at the age of 83.
Ann was born August 2, 1938 on Garfield Street and raised on Sherburn Street in West End Winnipeg. She attended Principal Sparling Elementary. When she moved to Roseberry Street South she attended St. James Collegiate where she met her lifelong friends, Kathy Cook and Shirley Hanna.
Ann was predeceased by her parents, Winnie and Norman Charlton; mother and father-in-law, Wilma and William Graves; her two brothers-in-law, Gord Gunlaugson and Jim Graves. She is survived by her sister Betty Gunlaugson and Jim Graves. She is survived by her sister Betty Gunlaugson, and nephews, Ken and Jim Gunlaugson her aunty Kay McCaffrey from Grand Forks, BC and her many cousins.
Left to cherish her memory are her husband Gerald; daughter Corrine Sachvie (Glen); son Bill (Joanne); and daughter Debbie Obie (Jim); six grandchildren, Dana (Matt), Brad (Morgan), Dallas (Shana), Tyler (Shy), Kurtis, and Jenessa (Kyle); and her pride and joy her great-grandchildren, Rylee, Hannah, Hayley, and Zoey.
After leaving school, Ann took a Burroughs Book keeping course and was employed with Walter Woods Wholesale Hardware as a book keeper. Ann and Gerald were married on October 9, 1959 at Sturgeon Creek United Church, and left immediately for Geraldton, Ontario where she was employed as the book keeper at G.M.C dealership; daughter Corinne was born while she was in Geraldton. She moved to Beausejour in 1962 where Bill and Debbie were born. All her children and grandchildren married and remained in Beausejour, which made Ann so very happy. Ann was involved with establishing the Insurance Business in Beausejour where she did the office book keeping. Ann was proud of being a Legion member and volunteer for 39 years, as her father Norman was a Veteran.
Ann loved to travel, taking several cruises with good friends, to the Panama Canal, Alaska, and the Caribbean. She also enjoyed her trips to Hawaii and Las Vegas. Also, several bus trips going to Branson Missouri, and the East and West Coasts of Canada, Casino and shopping tours both to the USA and Mexico. Ann's later years were spent wintering in Florida, Arizona and twenty years in Magic Valley Park in Weslaco, Texas. She also loved her time with friends and family at her trailer on Bird River, MB. She loved curling and "bonspieling" for over thirty years with Marge and Alex Bush especially the spiels in Bissett. Ann loved to play bingo and the Beau Head Seniors and especially loved having Friday morning coffee with her good friends.
In lieu of flowers, a donation would be appreciated to the Royal Canadian Legion Beausejour Branch, 132 Veterans Lane, Beausejour, MB R0E 0C0.
She will be laid to rest with her Mom and Dad at Chapel Lawn Funeral Home, 4000 Portage Avenue, Winnipeg, MB.