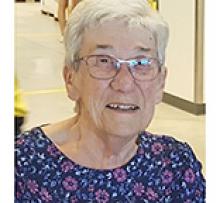 Patricia (Pat) Rose Lucas passed away peacefully on the morning of Saturday, October 16, 2021 (age 85) at Poseidon Care Centre in Winnipeg.
She was born on July 16, 1936 in Winnipeg, Manitoba and was the eldest daughter of Charles Henry and Rosanna Jeffery.
Pat spent her entire childhood and early adulthood in Winnipeg. She entered the workforce at Great West Life at the age of 17. That job allowed her to save enough money to travel Europe with a friend for several months. Once back home in Winnipeg, she started a new job at Canadian Pacific Railway where she met her lifelong friend, Helen Murdock.
On June 2, 1962, Pat married Roy Lucas and the couple moved to Selkirk, Manitoba where he worked at the Manitoba Steel Rolling Mills. Pat continued to work in Winnipeg until the spring of 1963. Later that year, Roy found employment at Atomic Energy of Canada (AECL) and the couple moved to Pinawa where their new life together would begin. They were one of the pioneer families of the new town and shared many adventures in the early days of Pinawa.
Pat was a stay at home mom until her children were well into their school years. She re-entered the workforce with a part-time job at the municipal office. After a few years, Pat then went on to work at AECL as an administrative assistant where she remained until her retirement in 1991.
For the entire time Pat lived in Pinawa, serving her community was extremely important to her. She was involved in numerous organizations over the years and often volunteered her time. She volunteered at F.W. Gilbert School, helped in the Pinawa Public Library, and sold daffodils for CancerCare Manitoba. Her involvement with the Pinawa Health Auxiliary was very important to her and you would often see her cooking burgers at the beach during Pinawa Birthday weekends, or selling some of her famous lemon meringue pies at the mall for an Auxiliary fundraiser.
Pat moved back to Winnipeg to Riverwood Square Assisted Living in 2013, where she remained until October of 2020. She eventually moved to the Poseidon Care Centre where she passed away on October 16, 2021.
She is survived by her son Brad (Janet), daughter Christine (Terry), her grandchildren, Kaitlin, Matt, Mike, Cameron (Cam), Sophie, Quinn, and great-grandson Damian. Pat was predeceased by her loving husband Roy in 1991, as well as her sister, Marlene Phillips.
Pat's life was a living example of Ephesians 4:32 - "Be kind and compassionate to one another, forgiving each other, just as God also forgave you in Christ." She touched many people's lives with her kindness and humble spirit and will be deeply missed by her many friends and family members.
Due to COVID restrictions, the family held a private service on Saturday, October 23, at Sobering Funeral Chapel in Beausejour, Manitoba. Interment followed at the Pinawa Cemetery in Pinawa, Manitoba.
In lieu of flowers, donations may be made to the Pinawa Health Auxiliary or Siloam Mission in Winnipeg.