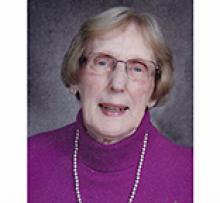 Peacefully on October 14, 2021, Lilian 'June' Berg (nee Kobar) at Extendicare Tuxedo Villa in Winnipeg.
June was born on June 6, 1933 in The Pas, Manitoba to her parents, Peter and Gertrude Kobar (nee Gislason). She grew up in the small northern Manitoba community of Herb Lake, and was the youngest of four siblings, brothers, Buster and Bart, and sister Ann. The family lived a pioneer life in a home with no running water or electricity, and relied on hunting, trapping and prospecting as a means of survival. June and Ann moved to Winnipeg as teenagers to complete their high school education at Balmoral Hall (then Rupert's Land Girls School). Following graduation in 1950, June enrolled at the Winnipeg General Hospital School of Nursing, and graduated as a Registered Nurse in 1954 with the '54B-ers class.
June met her future husband, Melvin in Winnipeg in 1957, and the two were married on May 23, 1959. For the first couple of years of their marriage, June and Mel resided in the 'basement suite' at the house of Mel's sister Lil, and Lil's husband, Bob McKnight in Winnipeg. June and Mel purchased a small house in the River Heights area of Winnipeg in 1961, and purchased a small cottage in the Ponemah area of Lake Winnipeg, south of Gimli in 1963.
June and Mel started a family life together and had two children, sons, Jeffrey and Douglas. June's passions were her family, her career as an RN at the Health Sciences Centre Winnipeg, and her many friends and relatives. Summers were spent at the family cottage where June would take two months off from work to be there with Jeff and Doug. Mel would drive out from Winnipeg every weekend. June was very involved in both Jeff and Doug's school education, and always emphasized the importance of an education. She was well known for hosting large dinners at their house for friends and relatives, often extending the dining table well into the living room! Out-of-town friends and relatives always had a place to stay at the Berg household when they were in Winnipeg. Conversation was important at all gatherings, and June made sure everyone participated so no one would feel 'left-out'. She was genuinely interested in everyone's personal stories and contributions. This consistently established a welcoming environment for all which is why June's dinners were always well-attended! June and Mel were also longtime active congregation members of St. Mark's Lutheran church in Winnipeg.
June will be fondly remembered as a sincere, kind and caring individual. She truly loved everyone, and remained close to all who knew her including siblings, relatives, and countless friends. She never met a stranger, and could engage effortlessly in conversation with any individual at an airport, in a grocery store lineup, or any social situation. She would come out of these conversations knowing everything about the person she had just met - their names, their children's names, where they lived, worked, etc., and she remembered all this information. She had an impeccable memory for birthdays, special occasions, and important appointments. Everyone could always count on June to know what was going-on at any given time, or be comforted by 'Nurse June' if they were not feeling well or needed some medical attention.
After selling their second house of 50-years in 2017, June and Mel lived in a retirement community facility, before finally moving to Extendicare Tuxedo Villa in early 2021 where they shared the same room. They were married for 62-years and remained together right to the end.
June is predeceased by son Douglas (Kara); and survived by husband Mel, and son Jeffrey (Jennifer). June is also survived by grandchildren, Lyneah (Doug's child), and Rebecca, Allison and Emily (Jeff's children). June loved her grandchildren, and is fondly remembered as 'Grandma June'. She also loved her numerous nieces and nephews, who fondly remember her as 'Auntie June', or 'Second Mom'.
No service will be held at this time.
In lieu of flowers, please make a donation in memory of Lilian June Berg to the Alzheimer Society of Manitoba.
The family would also like recognize the staff of Tuxedo Villa for their exceptional care and compassion.