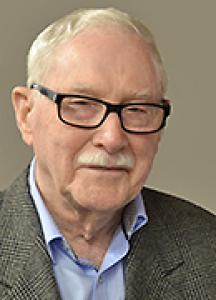 MCLEAN, Albert (February 16, 1928 – January 31, 2021) passed away peacefully on January 31, 2021 at Fairview Home, Brandon, MB at the age of 92 years. Albert was born February 16, 1928 in Brandon, MB, the fourth child of Duncan and Alma McLean. Albert attended school at Mount Vernon in St. George's District. In 1955, Albert wed his wife of 58 years, Mary (May) (nee Cooper). They resided on their farm in the RM of Elton for 36 years. For Albert, farming was his career, life and love - over the years he grew grain, raised livestock and enjoyed the sense of community that rural life brings. Always a good neighbor, he was ready to lend a hand, even serving as a councillor and constable for the RM of Elton. In 1991, Albert and Mary made the tough decision to leave their beloved farm and retired to Colonial Estates in Brandon, MB. Over the 22 years they lived there, they made many friends over numerous cups of coffee at the mall. Albert also enjoyed curling at the Brandon Curling Club, and still managed to get some grain dust on his coveralls by helping his son-in-law with harvest. Albert and Mary made another move in 2013 to Riverheights Terrace, Brandon, MB. They thoroughly enjoyed the music, dancing and opportunities, to yet again, make new friends. Albert's love of dancing was evident as he rarely missed a chance to dance, and he was a popular partner. In 2014, Albert lost his wife and best dance partner, Mary. In 2018, Albert moved to Fairview Personal Care Home, where, thanks to the Recreation team, they kept Albert dancing. Albert was a kind soul that loved to laugh and spend time with others. A practical joker and tease, many family members have fond memories of times spent with him. Possessing a child-like heart, he was loved dearly by his children, grandchildren and great-grandchildren. Albert will be lovingly remembered by his two daughters, Marlene (Don) Jury, Donna (Allan) Keffen; daughter-in-law, Lisa McLean; his five grandchildren, Stephanie (Tamir) and Michael (Jessica) Jury, Adam McLean, Darien and Brynn Keffen; his three great grandchildren, Tryss, Lawsyn and Blayke Jury; sister, Bernice (Eric) and numerous nieces and nephews. He was predeceased by his wife, Mary and his son, Wayne. A private family service, officiated by Father Chad McCharles, was held on October 23, 2021 with interment at Minnedosa Cemetery. A video of the service is available to watch at www.whitesfh.ca. If family and friends so desire, donations may be made to Fairview Home Foundation, 1351 13th St., Brandon, MB R7A 4S6.