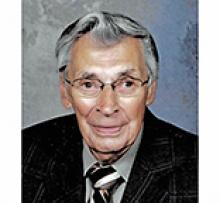 Roger was born in St. Boniface on November 23, 1929. He was predeceased by his parents, Louis and Lydia; and his beloved wife Helen in 1992.
Roger is survived by sister Gilberte Estes of Albuquerque and brother Louis Paul Leroeye (Ellen) of Winnipeg and their families.
Roger's life was influenced strongly by his parents' experiences in Belgium and later Wales during the First World War, and by being a child during the Great Depression.
Fortunate enough to be too young for military service in the Second World War, Roger had a map of Europe on his bedroom wall and closely followed the news reports of Allied progress following the Normandy invasion. Roger's life would be profoundly influenced by the Second World War.
An excellent student, Roger was awarded the Governor General's medal when he graduated from Provencher School. Enrolled in Engineering at the University of Manitoba in 1946, he was suddenly immersed in a world of older men, veterans of the Canadian Forces. His social environment was filled with serious, mature people whose goal was to get an education and move on with their lives in peacetime.
In the summer of 1949, Roger got a summer job as a surface worker at a mine in Flin Flon. This first adventure away from home provided stories for a lifetime.
Graduating at the top of his class in 1950 as an Electrical Engineer, his first endeavor was sandbagging at St. Boniface Hospital as the mighty Red River raged in the spring of 1950.
Despite solid academic accomplishments, employment options were limited for a youngster graduating with a class of veterans to whom their country owed a tremendous debt. Work in his chosen field was not to be found.
Roger took an entry level job at the company where his father worked, and with his education, intellect, dedication and perseverance worked his way up to an executive management position during a 37 year career.
A side benefit of his employment situation was discovering the girl of his dreams working for the same company! The lovely Helen became a June bride on a glorious day in 1954. They enjoyed 37 happy years together until Helen's sudden passing in 1992. Roger never really recovered from this tragic loss.
Roger enjoyed classical music and opera. In 1960, Roger and Helen acquired their bungalow in St. Vital. Shortly afterwards, he purchased what for the time was a state of the art stereo system. A large piece of wooden furniture, it had pride of place in his living room until he had to move to assisted living in 2020. Over the years, Roger's hearing aged gracefully, as did the music produced by his console stereo.
As a faithful member of Christ the King Church during his entire time in St. Vital, Roger participated heavily in committee work and supported the church's many activities.
An avid gardener, Roger's yard always featured a vegetable garden and was filled with plants and flowers every summer! As he grew older, the gardening activity kept pace with his personal abilities, slowing significantly in latter years.
What St. Vital yard would be complete without an apple tree? Not Roger's, certainly. After several unsuccessful plantings, he decided to make one last try and planted a pair of saplings. These trees were successful! As they grew to maturity, Roger found he had enough apples to supply everyone in the neighbourhood.
Towards the end of his time, Roger and his canine companion Bobby moved to assisted living in 2020. Pandemic precautions made this a lonely experience.
Eventually, Roger needed more help and through the kindness and support of the Palliative Care program was offered a place at the Grace Hospice in September. Many thanks to the Palliative Care nurses and the Hospice staff who worked diligently to ensure that Roger was as comfortable as he could be until he succumbed to cancer on October 27, 2021.
In keeping with Roger's wishes, Mass of Christian Burial will be celebrated on Tuesday, November 9, 2021 at 11:30 a.m. in Christ the King Roman Catholic Church, 847 St. Mary's Road.