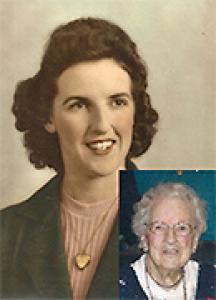 MCKENZIE, Margaret Euphamia (Stewart) McKenzie passed away peacefully with family by her side November 8, 2021 at the age of 105 years. Margaret was born October 10, 1916 to Janet and Alex Stewart on the farm near Oak River, MB. She grew up with brothers Bill and Harvey, attending school at White Bank Lea and riding her favourite horses Mac and Mae. She married Bill McKenzie who worked at the Stewart farm prior to basic army training at Shilo in 1942. Margaret worked in the Woollen Mills factory in Hamilton, ON while Bill was trained and then deployed during the Second World War to Italy, France, Belgium, Holland and North Africa. After returning from the war with Lord Strathcona Horse in 1946, Margaret and Bill operated the Bradward-ine grocery store where they worked hard and enjoyed community life. Margaret and Bill moved to Rivers in 1960 and Brandon in 1963 where Bill worked and retired from his sales supervisor position with Codville and IGA. Margaret was an avid sports enthusiast and participant enjoying and volunteering in leadership positions with curling and golf. Margaret became a life member at the Brandon Country Club. In later years, it would be common to find Margaret watching golf on TV while listening to a Blue Jays game on the radio. Margaret lived independently and celebrated her 100th birthday at Lions Manor in Brandon enjoying a big party with all her friends. Shortly after Mom moved to the Minnedosa Personal Care Home where the staff is so helpful and caring. She celebrated her 105th birthday October 10, 2021 with residents of the Care Home as COVID made it difficult for an open party. Margaret has one daughter, Wilma and husband Bob Jones, granddaughter Kristi and husband Stan Chorney and one great -granddaughter Logan Chorney and partner Luke Zaytsoff. Also Anne Chorney and many nieces and nephews. Margaret was pre-deceased by brother Bill Stewart and wife Jean. Her brother, Harvey Stewart and wife Chrissie, nephews Bruce Stewart and Gary Stewart. Margaret lived a long and full life. She will be dearly missed. There will be a private family gathering at the Oak River Cemetery in the spring.