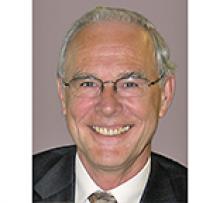 On Saturday morning, November 20, 2021, Ted passed peacefully from this world, and from the loving care of his wife, Norma, into the eternal embrace of God.
Ted was born, raised, and lived the majority of his 76 years in Winnipeg, with the last 11, retired in Nanaimo, BC. He enjoyed and excelled in his actuarial career with Great-West Life Assurance for 41 years, and was associated with several charities, L'Arche and Winnipeg Harvest being among them. His integrity, his sense of fair play and justice, his abiding love for his family and friends were his hallmarks. Ted never lost touch with his teen band friends and enjoyed reminiscing about the good times and the great music era. His family dubbed him, "Mr. Fix It", and marvelled at his knack for finding the best deal for most anything.
He leaves a deep void in the lives of Norma; his son David (Zsuzsa); his daughter Susan (Sean); his grandchildren, Samantha, Aleyna, Sebastian, Christian, and Adrian; as well as his many friends and extended family.
If friends wish, donations may be made in Ted's memory to a charity of their choice.
Flowers are gratefully declined.
At Ted's request, interment will take place in Winnipeg at a later date.