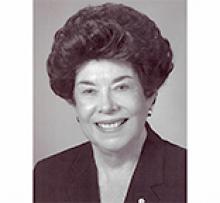 It is with deep sadness that the family announces the sudden passing of Helen Frances Hayles C.M., our loving Mom, Grandma, and Great-Grandma (GG) on Sunday, November 14, 2021. Helen was predeceased by her husband, Bruce Hayles, on November 8, 2016.
Helen was born in Brandon, Manitoba on June 11, 1929 to Milburn Barker and Marion Frances Barker (Anderson). After her mother passed away when Helen was in her late twenties, her father married Louella (Jake) Jakobite, her loving stepmother of many years. Helen spent most of her life living in Winnipeg and grew up in the Wolseley and River Heights area. She attended Laura Secord and Gordon Bell High School, where she made many lifelong friends.
After meeting Bruce Hayles at a party his sister was having, the rest is history. Helen and Bruce were married May 16, 1953.
From 1949 to 1954, Helen acted as Permanent Secretary of the University of Manitoba Student's Union (UMSU) working with five UMSU Presidents: Arthur Mauro, Bill Norrie, Conrad Wyrzykowski, Dick Bocking, and Scott Wright. Helen left the University to start her family and joined the Junior League of Winnipeg. She was very involved in the Junior League, which was the start of her volunteer and community service passion.
Helen's management and volunteer skills acquired while at UMSU along with the Junior League led her to become Executive Director of the Volunteer Centre in 1978. Under her leadership, the Centre planned and implemented the Coordinator of Volunteers Project, which promoted the concept of planning and management in volunteer programs. She co-developed and implemented a model for providing volunteer services to the schools of the Winnipeg School Division. Helen also founded Contact Community Information, Manitoba's most comprehensive information and Referral Service on Community Programs.
During her career, Helen made significant contributions to many of Winnipeg's cultural, educational, charitable, and volunteer organizations. She led by example and actively promoted, developed, and implemented volunteer services and programs in her community.
During the 1970s, Helen was Board Member of the Age and Opportunity Centre, Member of the Allocations Committee United Way of Winnipeg, and Board Member, Social Planning Council of Winnipeg.
During the 1980's, she was Chair of the Canadian Associations of Volunteer Bureaux/Centres; Board Member National Voluntary Organizations; member of the Core Area Advisory Committee concerned with the revitalization of Winnipeg's core area and sponsored by the governments of Canada, Manitoba, and Winnipeg; and was appointed to the Board of the Winnipeg Foundation, Canada's oldest and second largest Community Foundation.
Helen was also nominated by the Manitoba Association of Volunteer Administrators for a YWCA Women of the Year Award, and was awarded the Manitoba Parks and Recreation Association Life Membership Award in recognition of service towards the field of Parks, Recreation and Leisure Services and for the development of volunteer services for the City of Winnipeg. She also became a Board Member of Partners in the Park.
During the 1990s, Helen became Co-Chair of the Coalition of National Voluntary Organizations, assisted in presenting to the Blencairn Committee the implications of the GST on the voluntary sector in Canada, and became a Member of the National Advisory Council of the Imagine Program. She was also appointed by the City and Province as a Member of the Interim Steering Committee - a committee whose mandate was to study the Jet's (NHL Hockey Team) viability and future in Winnipeg, which also included the building of a new arena.
Helen became a Member of the Leaders of the Way Committee/United Way of Winnipeg and a member of the Winnipeg Library Steering Committee whose purpose was to assess the future role of libraries in Winnipeg. She also became President of the Winnipeg Child and Family Services Agency, and the President of the Winnipeg Symphony Orchestra.
During the 2000s, Helen became Treasurer and then Chair of the Winnipeg Foundation, Board Member, the Pavilion Gallery Museum and Board Member of Arts Stabilization Manitoba.
Helen was nominated as Member of the Governor General's Advisory Committee for the Caring Canadian Award.
During her lifetime, Helen was recognized with many awards for her outstanding achievements - the most prominent being a two-time recipient of the Queens Jubilee Award and receiving the University of Manitoba Distinguished Service Award.
After a lifetime of deep community involvement, she was nominated and became a Member of The Order of Canada on April 27, 2000, of which Helen and her family were most proud. She was invested by the Governor General of Canada in Ottawa on February 28, 2001.
Helen was devoted to the growth and betterment of the City of Winnipeg and dedicated her life to many causes, retiring at the age of 75. She and Bruce spent their remaining years together, enjoying time with their family and friends.
Helen will be greatly missed by her daughter Sharon (Paul), son Bill (Julie), granddaughter Jamie (Mike), and great-grandsons, Nathan and Brody.
We would like to thank everyone at The Wellington for their friendship, care, and support while she was living there since Bruce's passing. We have tremendous gratitude for the Home Instead staff as well, especially Nicole, Jodie, and Marie whose care and support, especially these last couple of years dealing with the pandemic, were unwavering.
In keeping with Helen's wishes, cremation has taken place and a Memorial Service will be announced for Spring 2022.
In lieu of flowers, donations in memory of Helen may be made to the Winnipeg Foundation, 1350 One Lombard Place, Winnipeg, MB R3B 0X3. For easy access please reference the link below: