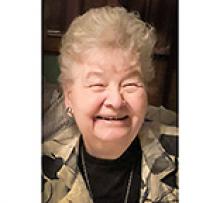 We say goodbye with sad hearts to our mother, grandmother, great-grandmother, sister, auntie and friend. Lucille departed life celebrating her 87th birthday at Riverview Health Centre following a brief illness.
Lucille was born November 28, to Francis and Peter Kresky and grew up in the North End of Winnipeg to which Cliff and Lucille purchased their first house in 1955, the year they were married. Lucille had many cherished lifelong friends from those years. In 1961, they moved to Transcona for a bigger home and raised their family in the community to which they enjoyed actively participating in. Lucille worked in the Transcona School Division as a secretary for Radisson and Wayoata Schools until her retirement in 1985. Lucille was happiest spending time with her family and friends. Their photo albums capture celebrations at Winnipeg Beach, Belair, by the backyard pool and in Clearwater, Florida - along with many vacations with family and friends. Cliff and Lucille especially enjoyed their trips together to Hawaii.
Lucille was predeceased by her loving husband Clifford (2010) and mother (2014). She is survived by her sons, Charles (Julie) and Lawrence (Andrea); treasured grandchildren, Jason (A.D.), Jillian (Jack), and Jessica (Nate); brother Richard (Joanne); Laurie; great-grandchildren, Sloane, Kynlie, Norah, Sophia; her nieces and nephews, as well friends who were blessed to know her.
A kind thanks to the Palliative Team at Riverview Health Centre for their loving care for Lucille in the final days of her life.
The family will be holding a private interment in the spring.
In lieu of flowers, donations in Lucille's memory may be made to the organization of your choice.