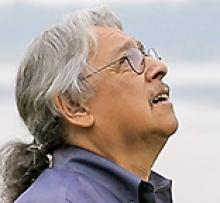 It is with great sadness that the family of Nitamabit/Nii Gaani Aki Inini (Elder Dave Courchene) announces his passing into the Spirit World on Wednesday, December 8, 2021, after a long and courageous battle with illness. He was cared for and surrounded by his family during his final days at his residence.
Dr. Elder Courchene was born on January 30, 1950 in Pine Falls, Manitoba to his parents, Dave Courchene Sr. and Margaret Courchene.
He was predeceased in February 2020 by his beloved wife and matriarch of the family, Orianna Courchene. He spoke often about how much he missed her and it brings his family great comfort knowing that they are reunited in the Spirit World.
He was the second oldest of seven: Lorraine (predeceased) (Art) and Brian (predeceased) (Susan) and survived by Shirley (Art), Gerald (Eve), Darlene and Brad. He will be lovingly remembered and missed by his children, Buffey (Henry) and David (Lisa), and his adopted children, Adam and Crystal. He will also be missed by his many grandchildren, Jennika (Justin), Sky, Cody, Dakota, Henry Jr., Brent, Orianna, Kamryn, Lucas (Katriina), Dawson, Animki, Rheanna, Zoey, Salyysa, Alex, Lariah, Lyaleigh and Maliyah; and great-grandchildren, Dallas, Paris, Athena, Sadie, Kiose, Brelynn, Hunter, Nikki, Orion, and Autumn.
Dr. Elder Courchene was a respected and loved Elder and Knowledge Keeper of the Anishinaabe Nation. He devoted his life to sharing Indigenous knowledge, with the foundation of his teachings grounded in the Seven Sacred Laws. He travelled internationally carrying a message of kindness, love, and pride in his identity as an Anishinaabe. He encouraged all of us to use our gifts and unique spiritual identity to create a better life on Mother Earth for all of our children and grandchildren. He was very dedicated to living his leadership responsibility in sharing a way of life as a Member of the Original Nations of Turtle Island. His greatest hope was for the human family of all colours to feel and love Mother Earth and to come together in unity and kindness.
Dr. Elder Courchene had a deep love for music of all genres, often blasting the music in his home during the early morning hours. He was a devoted fan of Victor Newman and Young & the Restless and never wanted to miss an episode. He was a gifted storyteller; with many laughs and cherished moments shared listening to him tell stories with his one of a kind sense of humour as he picked on those he cared for in a loving way.
The Ceremonies and final viewing for the family and friends of Dr. Elder Courchene will begin on Thursday, December 9 starting at 6:00 p.m. each evening at the Turtle Lodge in Sagkeeng First Nation, Manitoba.
The final Chii-By (Ancestor) Ceremony and Feast will begin at 11:00 a.m on Sunday, December 12. We kindly ask all those in attendance to bring a prepared Potluck dish to share for the Feast.
We humbly offer the opportunity to those who wish to provide donations to support the family to send an e-transfer to turtlelodge@mts.net