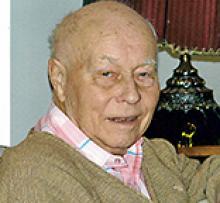 It is with heavy hearts that we announce the passing of our father, grandfather and great-grandfather, Henry Machel.
He was predeceased by his parents, first wife of 42 years, Martha, second wife of 24 years, Maria, daughter Ruth, grandson Kevin and two brothers.
He is survived by sons, Kurt (Silvana), Harold (Yvonne), six grandchildren, 13 great-grandchildren, one brother and two sisters.
Henry was born in Poland, fled to Germany near the end of the Second World War. He became a carpenter, immigrated to Canada, settled in Winnipeg and continued to work as a carpenter until retirement. He married Martha in 1951 and raised three children. Henry was a devoted member of Saint Peters Lutheran Church. A few years after Martha passed away Henry married Maria. Church and family were his priorities as well as being able to provide for them.
A special thank you to all who looked after Dad from River East Access Centre and Concordia Hospital.
A service will be held at 11:00 a.m., Friday, December 17, 2021 at St. Peter's Lutheran Church, 65 Walnut Street, Winnipeg. Interment will follow at Brookside Cemetery.
Covid Protocols: All in Attendance are required to Be Fully Vaccinated, Only Those Who Can Show Proof Of Vaccination And Government Issued ID Will Be Permitted To Attend. Face Masks are Mandatory.

Expressions of condolences may be left at www.neilbardalinc.com.