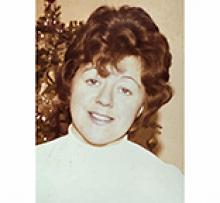 With profound sadness and heavy hearts, we, Clan Ratcliffe, announce the passing of our mother, sister, grandmother, aunt, and friend, Mary Ratcliffe.

Ma was the second oldest in a large Irish Catholic family. When WW2 started, her dad enlisted and went to Europe, leaving her mum to raise the children alone. Ma always looked up to her older brother, John. As such, and during the war, they spent many hours together collecting sticks. The bundled “fire starter” sticks were then sold door-to-door, earning a few extra pennies to buy food for their family. Apparently, war coupons only went so far.

After the Second World War, her dad was hospitalized for a few years. The stress took a toll on her mother, as she too became ill. Maureen became the primary caregiver to her younger siblings. When she turned 14, mum got her first paying job at the Flax St. Mill. Not much had changed, with almost every penny still going to support her family.

In her late teens, mum met and married our dad. Together, they worked hard, saved some money, and bought their first home together which was one of many over the years.

In 1968, war broke out in our country – “The Troubles” – which was just a repeat of hundreds of years of colonial oppression. As the war got worse, Ma and Da decided it would be safer to move the family far, far away.

After immigrating to the relative safety of Nova Scotia, Canada, they started a new life. A new home was built, many new friends were made, along with some re-acquaintances with other ex-pats. Alas, while you can take the girl out of Belfast, you’ll never take Belfast out of the girl.

Homesick, and in 1980, they moved back to Belfast. This was a short-lived move however, as Belfast was still a war zone.

Before returning to Canada, Ma stipulated she wanted to move to Winnipeg to be closer to her brother, John, and his family. Reunited with her big brother, she worked with him at his business, J.D. Oils.

In 1985, the highlight for Ma was helping her sister, Kathleen, and her family, immigrate to Winnipeg. Born two years apart, the twins were reunited on July 19.

In 1988, and after John passed away, Ma went to work at the Winnipeg Municipal Hospitals, finishing her career with Handi-Transit. Ma spoke highly of all those she worked with over the years, making many lifelong friends.

Maureen took great pride in her grandchildren, with many fond memories of sleepovers, movies, and teaching them to cook real food.

In retirement, she spent most of her time in the garden and kitchen. Retirement also allowed Ma and Da to travel more, with trips to B.C., Nova Scotia, and Ireland . . . post Peace Accords.

In 2011, and after Da passed, Ma began suffering various health issues, especially over the past two years. Confined, like so many others, it took a toll on her physical and mental health.

Maureen is survived by her son, Malcolm (Bonnie); daughter, Treasaigh (Ken); Grandchildren, Róisín, Conor, Eámon; sister, Colette (Thomas); sister in law, Cathy (Jimmy (d.)); and brother in law, Charlie (Kathleen (d.)); along with many nieces and nephews the world over. We would also like to acknowledge her good friends, Aunt Marie; Ma’s buddy, Tanis, and Murial Grey.

The family would like to thank Dr. Arie Lazarus, Winnipeg Fire Paramedics, and the doctors, nurses, and staff at the Grace Hospital for their compassion and care.

A traditional Irish wake has been held. Interment will be at Glen Lawn Memorial Gardens beside her sister, Kathleen. A small private family service will be held to send her on her way home.

Family and friends wishing to attend the service may do so virtually at 10:00 am (4:00 pm in the UK) on Friday, December 24, 2021 at: afterword.com/stories/mary-ratcliffe