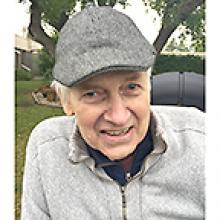 
On their 60th wedding anniversary, Garry passed away at the age of 81. He had suffered Alzheimer's for many years and was in the care of the wonderful personnel at Charleswood Care Home.
He is survived by his loving wife and caregiver Audrey; daughter Sherrie (Derek); sister Dot; and many nieces, nephews and their children. Garry is now with the angels: his beloved son Shane; Mom and Dad Jean and Johnnie; brothers and sisters, Annabell (Joe) and Donald (Margaret); and in-laws, Bill, Martha and Jack, Donna and Vic, Sadie and Wattie.
Born in Glenella, Garry grew up on the farm in Pipestone, Manitoba. He was a mature young man, athletic and hardworking. In 1958, he met Audrey at a ball tournament in Langruth and, together, they shared 60 years of love and happiness with their family and friends. He loved family, children, helping others (including strangers), Johnny Cash, time at Lee River, and won much more than he lost at the poker and roulette tables. Garry had a great sense of humour and loved to laugh, wearing that infectious smile right up to his last days. He was a kind and gentle soul. He was a member of Westminster United Church.
Garry was a sports enthusiast as a player, but his passion was coaching numerous fastball and ringette teams. His positive influence on young people was enduring. He enjoyed tremendous success – not just in the win columns – but in the special relationships he formed with his players, instilling qualities of hard work, teamwork, and fair play. He sat on the board of the Manitoba Softball Association and, in 2013, was inducted into the Manitoba Softball Hall of Fame.
Beginning his professional career as General Manager of the U of M Bookstore in 1959, this led him to own and operate Grange Stationers Ltd. beginning in 1974. He was a longstanding member of the Winnipeg Executives Association. In later years he worked with Shane at Dollarwise Cleaners until he was no longer able due to his illness.
Audrey and Garry shared a wonderful life full of love and laughter. When the illness took hold, Audrey was Garry's rock, navigating him through the challenges of Alzheimer's with unwavering love and support. She continued to provide care, companionship and was his voice and protector while he was in the care home.
We offer most sincere thanks to the staff and management of Revera Charleswood Long Term Care Home. The kindness and care afforded to Garry during these very difficult times was exceptional and we are so very grateful.
In lieu of flowers, please make a donation to the Alzheimer Society of Manitoba.
A service to celebrate Garry's life will not be arranged at this time.