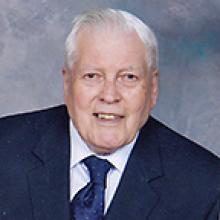 
Peacefully, on January 4, 2022, Arthur William Stephens passed away at the age of 91 years.
He is survived by his wife, Patricia, children Michael (Dorothy), Allan (Billie), Mary (Gerry), Cathy, and John (Maria), eight grandchildren and two great-grandchildren, as well as cousins in Scotland, England and Canada. He was predeceased by his sister, Nora, in 2015.
Arthur was born February 2, 1930, in Cranbrook, BC and moved to England with his parents in 1934. He was educated at Harlow College and Loughborough College, then served as a Radar Operator in the R.A.F. for two years, before returning to Canada in 1950. He was first employed by Sherwin-Williams Paint Company, before joining Great-West Life in 1953 and retiring in 1991 as Manager of Operational Auditing.
Art was active in a number of organizations of the Anglican Church, and a long-time blood donor.
On August 18, 2021, Arthur and Patricia celebrated their 65th wedding anniversary.
Cremation has taken place, and a memorial service will be held at a future date.
In lieu of flowers, donations to Agape Table or Assiniboine Park Conservancy would be appreciated.


"And I said to the man who stood at the gate of the year: Give me a light that I may tread safely into the unknown! And he replied: Go out into the darkness and put thine hand into the hand of God. That shall be to thee better than light and safer than a known way."