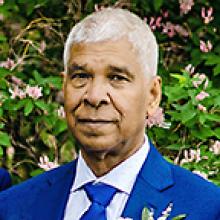 
It is with deep sadness that we announce the unexpected passing of our husband, father, and brother, Ralph, on December 25, 2021, in his Winnipeg home.
He is forever remembered by his wife (Lucy), children, Reece (Nicole) and Rianne (Lisa), sister-in-law (Liz), as well as his extended family, Fred (Jo-Anne) and Gary (Shelly) Arnold and their families. He is survived by his loving brother Roland, his sisters, Council, Cynthia, Samdai, and his large family in Trinidad.
He was preceded by his parents, Ramkissoon and Boodhanie, his brother-in-law (Peter), and Frank and Helen Arnold.
Ralph was born and raised in Siparia, Trinidad, where he brought his highly social, athletic, and hard-working nature to his involvement in the military, martial arts, and soccer. With the support of the Arnold family, he immigrated to Canada in 1970 and started a new chapter in Oakbank. He worked at Arnold Brothers Transport for more than 50 years, where he met his loving wife and settled in Winnipeg to raise a family.
Ralph was active in the soccer community, playing, refereeing, and coaching at high levels. He had many interests over the years, including travelling, gardening, and his love for pets.
Ralph will forever be remembered for his loyalty, kindness, and laughter. May his memory be eternal.
A Celebration of Life will be held at a later date.
In lieu of flowers, donations may be made to the United Church in Meadowood or a charity of your choice.