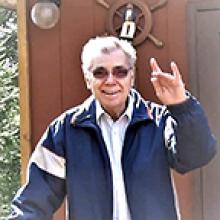 
Peacefully, after a short illness Anthony Dubicki passed away with his wife and two sons by his side on January 5, 2022 at the age of 88 years.
Anthony was predeceased by his father Bernard, mother Maria and infant brother John.
Anthony is lovingly remembered by his wife Adela; sons, Robert (Nancy) and Jim (Elizabeth); grandchildren, Tyler and Samantha; sister Sophie Targonski, nephew Richard (Bunny) Targonski, niece Lucy Thompson and extended family in Australia, Germany, Scotland and the USA.
Anthony was born in Cielechowszyzna, Poland and started life on the family farm. In 1943 the family was moved to Germany where they worked for a German farmer. In 1950 the family immigrated to Canada and settled in Winnipeg.
Anthony initially worked as a welder for Dominion Bridge but continued his education through night courses. Anthony always received high marks and he was able to trade his welding torch for a pencil when he got a job as a draftsman working for the Province of Manitoba Water Resources Division. Dad always had beautiful penmanship. His printing and writing always looked like a work of art. This turned into a career where he eventually became a department leader, a position he held until his retirement in 1992.
Anthony was very involved with Winnipeg's Polish community. He was a lifelong member of Holy Ghost Church, where he was a fixture as a church usher and would always volunteer his time on various committees. Dad loved to dance. In his youth he was a member of the Sokol dance group where they performed traditional Polish dances. He would also attend the youth dances at Sokol where his polka would spin his partner like a top. It was at one of these dances where he met his lifelong sweetheart and partner Adela Yurkowski. This resulted in a beautiful October wedding in 1957. They recently celebrated their 64th wedding anniversary.
Anthony was also a long-standing member of various organizations; he served on the board of directors for Holy Spirit Credit Union, SPK Polish Combatants Association branch #13, and the Knights of Columbus. Anthony was always helping out, from being club secretary to fundraising, he volunteered many hours at the mall selling tickets and coercing his friends into buying. He was also known as Mr. Bingo. Many years were spent running bingo and raising funds for Holy Ghost Church and SPK. It was always a treat when he would bring home any leftover donuts from bingo.
Anthony loved being outdoors and the family spent many afternoons at Winnipeg Beach and Seven Sisters picnicking. Fishing was always a treat with Dad, catching goldeyes and catfish at Pine Falls, having to leave for Caribou Falls in Ontario at 2:00 a.m., so we could stop in Kenora for coffee with crummy pie, and still get there for sunup. I never remembered the ride home. It was a long day. Dad also enjoyed fishing with friends at Fairford, the Whiteshell and for sturgeon at Nutimik. Mushroom picking was always a treat in the Sandilands. Dad would let us drive the car, and always tell us to slow down. Apparently it's dangerous to allow 10 year olds to drive 60 mph on gravel roads. It was fun. When winter came around Dad enjoyed downhill skiing. Springhill for a few hours in the evening or day trips to Mount Agassiz and Holiday Mountain were always fun. Cross country skiing through Kildonan Golf Course was also enjoyed.
Dad and Mom enjoyed many road trips to visit friends in Canada and the USA. For their 25th anniversary they toured England, France, Switzerland and Italy. The highlight was seeing Pope John Paul II. Another memorable trip involved taking their grandson Tyler and visiting Poland, Germany, Slovakia, Czech Republic and Hungary.
Anthony was an accomplished carpenter, also known to many as Mr. Fixit, he could build or fix anything. He would help anyone with building a rec room, fence, deck, or cottage. Dad helped build many of the initial structures at the SPK Polish Scout Camp at Big Whiteshell lake.
Anthony decided to buy his own cottage in Belair in 1990. He enjoyed building an addition and renovating over the next 20 plus years. It was a great place to relax and play cards with friends.
Anthony enjoyed watching sports on TV, he was a big Winnipeg Jets Hockey fan, along with football and wrestling. He was a huge supporter of his grandchildren and their sports. He spent many hours in arenas and gyms watching them play hockey, volleyball and basketball.
Family was everything to Dad and he was very proud of his children and grandchildren.
Anthony was a generous man who helped so many throughout his life.


Should friends desire, donations may be made to Holy Ghost Cemetery Fund or a charity of your choice.
Due to the current Provincial Pandemic restrictions a private family funeral will be held. A livestream of the service will be available at www.holyghost.ca, click on the broadcast, then livestream link on Monday, January 17 at 10:00 a.m.