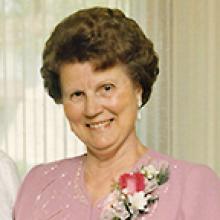 
Peacefully at home, and surrounded by family, Tamara's life on this earth came to an end on January 12, 2022.
She was predeceased by her parents, John and Motria, and her beloved husband William. She leaves to mourn her passing an only daughter Lydia, son-in-law Oleh, younger brothers, Walter and John and their families, as well as many relatives in Ukraine and the USA.
She was born in the village of Drabynivka, Poltava Oblast, in central Ukraine on June 7, 1936 in the aftermath of one of the greatest horrors ever inflicted on her country, the Famine-Genocide or Holodomor of 1932-33. Her childhood was foreshortened by many resulting consequences and the start of the Second World War. With their home engulfed in flames, the family fled ahead of advancing Soviet forces and the tyrannical regime enslaving her homeland. Her father, mother and little Tamara with horse and cart laden with all they could carry, headed west, crossing wide rivers and almost all of war-ravaged Europe to find themselves caught in that immense wave of displaced people hoping to find a place of safety, peace and a chance for a better life. This indeed occurred when Tamara, with her parents, were accepted as landed immigrants in Canada and eventually settled in Winnipeg. Tamara had always been grateful to Canada, her adoptive country, for the freedom, opportunities, peace and contentment that figured so prominently for the rest of her life.
However, Tamara did not forget her homeland, the richness of the culture, traditions, language, literary works and religious beliefs. She longed for some contact with her family far away who no doubt were resigned to the thought that everyone had long since perished. In Winnipeg, Tamara met her husband William, who was also of similar background and heritage, and they together became involved in various Ukrainian community activities. Both were longtime members of the Ukrainian Orthodox Metropolitan Cathedral of the Holy Trinity where she joined the Ukrainian Canadian Women's Association and for a time taught Sunday School. She became President of the Ukrainian Canadian Women's Committee Manitoba Provincial Council. With her husband she continued to be actively involved in the Ukrainian Canadian community and was most generous in her support of many organizations, charities, causes and patriotic events. Once it became safely possible to re-establish contacts and ongoing communications with family in Ukraine, this occurred more often, with never a lost opportunity to provide much needed financial support. She was also able to travel to Ukraine on three occasions and reunited with many cousins as well as meeting other relatives. She began sponsoring and hosting many Ukrainian visitors from abroad. Tamara was no exception to that high regard that Ukrainians have for hospitality. She had an open-door policy for her friends, family or strangers alike. Even unexpected "drop-ins" were commonplace.
Family gatherings for traditional holidays of Christmas Eve, Easter and Thanksgiving were highly cherished and she always gave painstaking effort to try and preserve and pass on important traditions to following generations. She was especially proud of her many culinary talents and saved special recipes. As well, she was most artistic with her various embroideries. Tamara had a beautiful soprano voice and enjoyed singing, drama, poetry and especially was a devoted reader of Shevchenko's "Kobzar". In her home she took great pride in being most organized, having a penchant for order and a meticulous cleanliness.
Above all, Tamara's most treasured memories were those of summer weekends and evening campfires at Ukrainian Park with her circle of very close friends.


At Tamara's request, a private family funeral will be held.
Flowers are gratefully declined, but if so desired, donations in her memory may be directed to: Ukrainian Orthodox Metropolitan Cathedral of the Holy Trinity, 1175 Main St., Winnipeg, MB R2W 3S4 / https://www.htuomc.org/donate Help Us Help, PO Box 84600 RPO Bloor West, Toronto, ON M6S 9Z9 / www.helpushelp.charity/donate or CancerCare Manitoba Foundation, 675 McDermot Ave., Winnipeg, MB R3E 9Z9 / https://www.cancercare.mb.ca/Ways-To-Help/donate or any other charity of your choice.