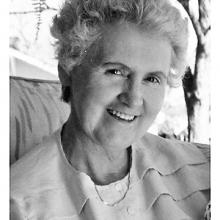 
Peacefully on December 23, 2021, Sheila passed away at Holy Family Home, Winnipeg. Sheila (nee White) was predeceased by her husband, Allan and daughter, Christine.
She is survived by her children, David (Wei), Gregory (Renee), Laura (Peter) and Paul (Ivonne). She is also remembered by her nine grandchildren, Lee (Brandon), Adam (Chrissy), Tyler, Jesse (Morgan), Kaitlyn (Kraig), Jasmine, Steven (Shay), Andrew (Nadia), Dayna and her three great-grandchildren, Nicholas, Jaxon and Emilia. Sheila is survived and fondly remembered by her three brothers, Jack, David and Lesley and their spouses.
Sheila was born in Abbey, Saskatchewan and grew up there in the Dirty Thirties. She always reminisced about those early days and the farmstead where she lived. In her teens, the family sold the farm and moved to Swift Current, Saskatchewan where she graduated from high school. After high school, she taught for a year in Saskatchewan but decided more opportunities were available by moving to the big city of Winnipeg. In Winnipeg, she worked at Great West Life and the Imperial Bank of Commerce. She met Allan through co-workers and they married in 1952. Sheila and Allan farmed in the St. Francois Xavier area for the next 25 years and lived on the family farmstead until the early 2000s when they moved to Winnipeg. Sheila was active in the local community club, the Town Planning Committee and had many friends in the community.
Sheila loved hosting family dinners on Sundays, or any day of the week which always ended with a home cooked pie or special dessert. Sunday dinners were always a time to visit and catch up with whomever was around at the time. Sheila was an expert knitter and created her own patterns when someone requested a special item. She was also a quilter and sewer, and taught herself how to crochet. Most family members have some item to which she devoted many hours of labour. She was an avid reader until she was no longer able to read due to failing eyesight. She also enjoyed music especially classical and opera but often she would be playing Elton John, Gypsy Kings or other modern music. Baseball was also an activity she enjoyed - at first cheering for the Montreal Expos and in later years the Toronto Blue Jays and Winnipeg Goldeyes.
After the farm was sold, Sheila and Allan enjoyed spending time camping and fishing. In the spring they were often away fishing with friends or taking a grandchild on a fishing or camping trip. She also enjoyed many trips to places such as Morocco, Crete, Hong Kong, Turkey and Greece, Cuba, Mexico and many road trips across western Canada and the United States, often to visit friends and relatives.
The family wishes to thank the staff of Holy Family Home, who cared for Mom over the last eight months, for their compassion and thoughtfulness.
In lieu of flowers, donations may be made to a charity of your choice.
As per Sheila's request, cremation has taken place. Interment and a service will be held at a later date.