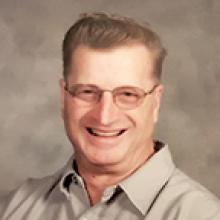 
It is with deep sadness we announce the passing of our father and grandfather Andrew Anderson. He passed peacefully Monday, January 10, 2022 at the Golden West Centennial Lodge, at the age of 82 years.
Andy is survived by his son Eric, daughter-in-law Heather, and his greatest treasures, granddaughters, Lauren and Brooke. Also survived by brothers, Mel and Ken, brother-in-law Gary (Carol) Horne, numerous nieces and nephews, and their families. Nephew Matthew and niece Kailie held an especially close place in their uncle Andy's heart.
He was predeceased by parents, Carl and Marietta, in-laws Alfred and Nan Horne, sister-in-law Linda, his beloved wife Donna, and infant son Douglas.
Andy was born March 14, 1939 in the Rainy River District, ON, spending his early years on the farm before moving with his family to McKenzie Island, ON as a young teen. He often said there was no better place to grow up than in Finntown, on the island with his brothers, and "sister" Arlie. Although he left the island briefly for employment, McKenzie Island was home, and Andy was a very well-known and respected island resident for over 60 years. It was here that he met Donna, the love of his life, the OR nurse from Southern Ontario who had never planned on staying, but became just as captivated with life in the north. They married in October, 1969 and welcomed their son Eric two years later.
Andy was the most devoted husband and father, and could always be found in a local rink, either supporting Eric's many hockey teams, volunteering for the minor hockey league, or goal judging with Ed Ratz. He enjoyed curling, bowling and any other activity that he was "volunteered" for. Friday nights were always kept for dinners in town with longtime friends The Thorpes, and weekends were for the lake with family. He loved his boat, and cruising the lake in his brother's houseboat. Many drinks and laughs were had when working on summer lakeside projects with the Poltronetti's, on getaway weekends at the M's, and when building and enjoying George and Toot's cabin at St. Paul's Bay. Each summer, Dad looked forward to driving the family down to Southern Ontario to catch up with Donna's family, drive through the States, take weekend trips to Manitoba, and see family out west.
Dad spent the majority of his career as a miner in the Red Lake area. He wasn't afraid of hard work, and made many lasting friendships along the way. This also carried over to the decades he served on the McKenzie Island Fire Department. He got along with everyone, was always there to help, and enjoyed working alongside his fellow islanders.
In recent years as Dad's health declined, he moved to Winnipeg to be closer to family. He made new friendships in his time at the Courts of St. James, The Westhaven and lastly at Golden West. The family wish to thank the caring neighbours, friends, and staff that made Dad's final years as comfortable as possible. You are all his angels.
As per Dad's wishes, cremation has taken place and a private graveside service will be held in Balmertown, ON this summer.
In lieu of flowers donations may be made in Dad's memory to Golden West Centennial Lodge, 811 School Rd., Winnipeg, MB R2Y 0S8, or to a charity of one's choice.