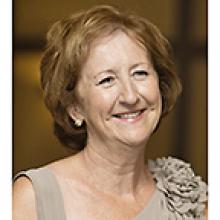 
It is with sadness beyond measure, that we announce the peaceful passing of Darlene Lillian Cecile Leggett (Davies) with her children, Lindsey and Neil by her side. She put up a strong and courageous fight in her battle with cancer.
She will be greatly missed by her children and grandchildren, Lindsey, Jon, Mari and Kyler Miskavige of Grand Forks, ND and Neil, Sheyanne, Brady and Jaxson Leggett of Winnipeg, MB. Family members left to mourn her loss include her dad Ross Davies; sister Janet Isfeld; brothers, Pat and Mona Davies, Jim and Sue Davies, Ron and Brigitte Davies, Glen and Jodi Davies; sister-in-law Becky Differ; brother-in-law Jim and Wendy Leggett and many nieces and nephews.
She was greeted at Heaven's Gates with open arms by her husband Donald; mom Jacqueline Davies; parents-in-law, William and Florence Leggett; brothers-in-law, Richard Isfeld, Brian Differ and Bob and Doreen Leggett.
We are forever grateful for the loving care that she received by the countless doctors, nurses and staff at both St. Boniface Hospital and the Riverview Health Centre Palliative Care Unit.
Cremation has taken place. As per Darlene's wish, no funeral will be held.
In lieu of flowers, a donation of a new pair of socks to Don and Darlene's special initiative, Siloam Mission New Sock Drive, would be great way to honour her memory.