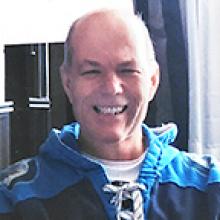 
It is with profound sadness that Vince's last harvest has been called and the last overtime played. Vince passed away peacefully on March 9, 2022, surrounded by the love of his family. He fought hard until the last call but it was time for him to stop and rest. He did his best and he got home to see his boys one last time.
Vince is survived by wife of 32 years, Eileen (nee Street) and his three sons, Tyler, Derek and Mason; his sister Stephanie; and brothers, John, Dan, and Donald Schewaga (Kim, Brian and Austin); by his mother-in-law Marion Street; brothers-in-law, Dave Street (Darlene, nieces, Rachel and Emily) and Michael Street (Jaqueline, nephews, Eric and Andrew); and many aunts, uncle and cousins.
Vince is predeceased by his father Steve and his mother Agnes (nee Bodin), by his father-in-law Lloyd Street, and his favorite dog Jaxson.
Born during the blizzard in 1966, he was the second son of Steve and Agnes. Vince grew up farming in Grande Pointe and farming was his passion. He learned from his father and uncles how to grow and care for the land. That passion translated into a degree in Agriculture from University of Manitoba. Curling was a family event and Vince loved to throw rocks, and an occasional broom, at weekend bonspiels. Vince enjoyed the fellowship of his neighbors and friends with the occasional beer afterward.
It was during his time in university that he met the love of his life, Eileen, at an Aggie social. Introduced thru a friend, and left standing alone with her, she asked him to dance. Even though he was so shy, they found their way to the dance floor where he stepped on her toes for the next 37 years. They were married in 1990 and lived in Ile des Chenes for the first four years. Vince was blessed with the birth of two sons, Tyler and Derek, during this time. He was so proud that he learned to change a diaper without it falling off or leaking.
In 1994, Vince was able to proudly take over the family farm from his father. Vince, Eileen and his sons moved to the family farm in 1994 and have resided there since. They were blessed with the appearance of another son, Mason in 1998 (after the flood…). Vince nurtured the farm and his family with all the love he had. Vince loved to talk farming for hours to friends and fellow farmers….anyone really. The invention of the cell phone, even though it was electronic, gave him hours of 'combine conversation' or updated field reports. He was always looking to improve crops, yields and equipment. Vince knew what crop was grown in what field 10 years ago but never could master the wedding anniversary date which became a running joke between Eileen and him. Vince loved a good joke or story.
Hockey became a passion when the sons were introduced to the sport. Vince learned the game as the kids grew and figured out what offside was and that throwing a fist gets you thrown in the penalty box much to his disgust. You could find him in the stands cheering on his sons. Hockey practice and tournaments became his winter past time and made many, many friends thru the years. He joined in frequently with the after-game activities, never missing a conversation while sleeping in the corner. Vince loved to watch curling, the Jets, the Bombers, and the NFL.
In the last few years, as his health started to deteriorate, the phone calls to friends and family became his lifeline. He would call people on a regular basis (except on weekends if not harvesting...LOL) That connection was so important for him. His calls to his mother-in-law, Marion Street, to yak about sports became part of his daily routine. He even took up watching baseball in 30 minutes on TSN just so he could talk about it.
Even though his heart got weaker, and hospital stays became more frequent, he never complained, and he never lost his hope. Vince's cheeky smile was always present even through the bad times. He was able to see his son Tyler graduate from physiotherapy, Derek buy his own home, and Mason take up farming. They were his pride and joy. Vince and Eileen made the final journey to Edmonton full of hope but the outcome wasn't what they had planned. Vince's beautiful, gentle soul has left us but his warmth and love of life will stay with us.
We would like to thank the many doctors over the years, Dr. Kroeker, the St. Boniface Heart Transplant team (Dr. Zeroth, Dr. Schaeffer, Sandy and Sherri) for their wonderful care over the years, and their compassion at the end. The University of Alberta specialists, doctors, and especially the nurses, did their best to change Vince's outcome.
A Celebration of Life will be held at 2:00 p.m. on Saturday, March 19, 2022 at Glen Lawn Funeral Home, 455 Lagimodiere Blvd. Winnipeg, MB.
In lieu of flowers, please donate to the Asper Cardiac Care at St. Boniface Hospital and please sign up for organ donations…it just takes a minute.