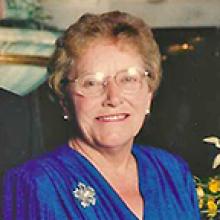 
It is with great sadness that we announce the peaceful passing of Irene Barbara Jones, on May 6, 2022.
She leaves her husband of 68 years, Wilfred; sons, David (Judy) and Mark (Ingrid); seven grandchildren and nine great-grandchildren. She was predeceased by her daughter, Karen; and her niece, Nancy.
Irene was born in Peterborough on March 19, 1932, to Frank and Jessie Nicholls. She met Wilf in Peterborough in 1952 and married in 1954. Wilf's service in the Armed Forces took them to live in St. Jean, Quebec, Winnipeg, Victoria, and again back to Winnipeg, where she retired in 1993 after working and teaching Child Care for many years at Red River College.
After retirement, she enjoyed many years with Wilf at their summer home at McConnell Lake and their winter home in McAllen, Texas. In 2010, they relocated permanently to Winnipeg. Irene's life was her family and we will always have treasured memories of our times together. Irene moved into Oakview Place in 2016 after her illness made it difficult to remain at home.
The family would like to extend their thanks and appreciation to the staff at Oakview Place, especially Tina of One East who took such great care of Irene during her stay.
Cremation has taken place and a family and friend gathering will take place at a later time.