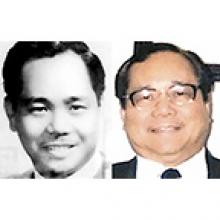 It is with great sadness that we announce the passing of our beloved father Dr. Rolando Corpuz Tabios Sr., who peacefully died on Saturday, May 28, 2022 at Grace Hospital at the age of 88 years old. He was surrounded by thoughts, daily prayers and loving support from his children, grandchildren and great-grandchildren.
Left to mourn are his seven children: Antonio (Angelina), daughter-in-law Nenita, Lorence (Ramilo), Rolando Jr. (Joylyn Grace), Rolfenda Luz, Allan (Grace), and Christian. He will be missed by his 12 grandchildren: Jacqueline (Bernard), Basil (Kayanne), Riolina (Marvin), Nicholas, Christopher, Christiana, Rollyn, Rocelynd, Roland James, Gabrielle, Josceline, and Caleb, as well as his seven great-grandchildren; Avaiya, Pierson, Lincoln, Peyton, Logan, Liam and Lucas.
He will also be missed by his dear brother Glicerio Tabios, and their children, Nathan, Arleene, Teddy (Loida) and Henry. He was predeceased by his son Jose Warlito Tabios, wife Rufina Dimaculangan Tabios, father Emilio Tabios, mother Florencia Corpuz, sisters, Avelina Tabios Felipe and Anita Tabios, brother 'Encing' Tabios and sister-in-law Eugenia Tabios.
Dr. Rolando Corpuz Tabios Sr. was born on August 11, 1933 in Licab, Nueva Ecija, Philippines. When he was young, he lived with his uncle, Rudy Paar and aunt, Tuding Paar in Quezon City, working during the daytime selling fruits and floor wax to support himself while attending night school. During his university years, he moved to Quiapo, Manila and finished his Bachelors of Arts, Bachelors of Science, Master's Degree in Education, Bachelor of Business Education (Major in Accounting), and Preparatory Law.
While he was working and studying in Quiapo, he met the love of his life, Rufina Dimaculangan, and they started a family together.
After his two sons, Riolindo and Warlito, were born they moved to Bauan, Batangas where he taught at Bauan High School as a teacher for many years before he became the principal. Ama never stopped pursuing his interest in continuing his education so he travelled to Manila every Saturday to finish his Doctoral Degree in Philosophy (PhD). He also taught at Pablo Borbon Memorial Institute of Technology, Lyceum of Batangas, Western Philippine College, Lipa City Colleges and became dean at Golden Gate Colleges. Rolando Sr. enjoyed politics where he became the number one Councillor in Bauan Batangas for more than 20 years.
He immigrated to Canada in April 1987, sponsored by his eldest son Riolindo and daughter-in-law Angelina. Ama first worked at the Philippine Centre on Juno Street, then became a law court translator and interpreter in Winnipeg. In 1991, he went on to teach at Lac Brochet School for seven years. By 1998, Ama retired and spent his time gardening, reading, writing and also taking care of his wife and many grandchildren. He enjoyed singing, listening to the news, and watching The Lawrence Welk Show.
The viewing/lamay for Dr. Rolando Tabios Sr. is scheduled for 5:00 p.m till 12:00 a.m on Saturday, June 4 at Thomson "In The Park" Funeral Home and Cemetery on 1291 McGillivray Boulevard. The funeral service will be held at St. Peter's Roman Catholic Church, 748 Keewatin Street, on Tuesday, June 7 at 12:30 p.m. Interment to follow.
We are grateful to the many friends and relatives for their love, support, encouragement and prayers over the past few days. We are indebted to his health care aides: Janice Baysic, Marlene Hernandez, Jenalyn Sarreal, Eva Abejar, Esperanza Villena, Virgie German and lastly his loving son-in-law Ramilo Silvestre. To all the hardworking doctors, nurses, and health care staff at Grace Hospital, we thank you for providing all the care he needed.