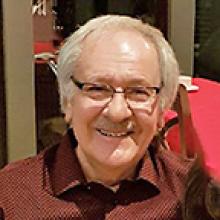 
It is with profound sadness and a lifetime of wonderful memories that we announce the sudden and unexpected passing of Paul Boyechko.
Paul will be lovingly remembered by the love of his life Florence (married for 57 years); his brother-in-law Vern Tkach (Faye); bother-in-law Peter Tkach (Marilyn); his brother Harry Boyechko (Shirley); along with numerous nephews, nieces and friends.
He is predeceased by his father Todosy; mother Pearl; father and mother-in-law Peter and Elizabeth Tkach; sister and brother-in-law Mary and Harry Tanchak; nephew Trevor Tanchak; and nine of his siblings.
Paul was born on a farm in Weiden, Manitoba and went to school in Rorketon where he could be found playing center field in summer and curling in winter.
In high school he met the love of his life Florence. They started dating with a little persuasion from Florence's sister Mary.
Soon after graduating high school Paul moved to Winnipeg to find employment. His first job was in the mailroom in the Grain Exchange Building. He didn't stay there very long as he started his career at General Distributors (Sony Canada) in June 1962 as the Manager of the import division. Having started his career, he decided to propose to Florence and the two were married September 18, 1965. He went back to school and received his Registered Industrial Accountant diploma in 1977. He then left Sony Canada in 1980 and spent time at a few apparel companies, Saan Stores, Canadian Sportswear and Nygard until he decided to purchase the lotto centre and kiosks in the Garden City Shopping Centre until he retired in 2001.
Paul was very hardworking, extremely generous, and had a great sense of humour. He was very humble, he rarely discussed himself, he always wanted to know about what was going on with others and was excited to learn about others' successes and achievements. He was always kind and quick to give compliments. Paul was impeccably detailed oriented from his flower gardens and lawn to his wardrobe and handwriting.
Paul was a person of faith. He belonged to St. Michaels Ukrainian Catholic Church, acted as a chancellor with The Knights of Columbus and was an active member with the Ukrainian Catholic Brotherhood of Canada K.S.V.
Paul lived his life to the fullest, enjoying many passions. He loved to cook and BBQ. He was an accomplished golfer, winning several golf tournaments including the Sony Company Tourney in 1972 and the Windsor Golf Club Championship in 2005. He loved his cars from the 1964 black and white Crown Victoria, Orange GTO Judge, white Cadillac to his white Lexus (always clean and spotless). He loved to travel, especially to sunny destinations whether it be to Hawaii with nephew Colin and his wife Kinnon, or with friends Gladys and Dwight, Palm Springs with friends Jack and Evelyn, Cuba, Mexico, Dominican Republic and a European river cruise. He loved to gather with friends and family, BBQs at Mary and Harry's, pool parties at Marilyn and Peters', coffee with the guys in the morning, or breakfast, lunch or dinner.
His greatest passion was his best friend and love of his life Florence. They were simply inseparable.
Paul you will be greatly missed and never forgotten.
A Memorial Service will be held at Glen Lawn Funeral Home at 455 Lagimodiere Blvd., on Friday June 10, 2022, at 2:00 p.m.
In lieu of flowers, please donate to Diabetes Canada in memory of Paul.