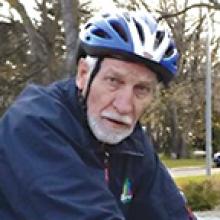 
On June 17, 2022, Walter Stefanchuk passed away at the age of 89.
Left to remember him are his wife Pat, son Mark (Mary), and daughter Lynne. He is also mourned by in-laws, nieces, nephews and countless friends whose lives he deeply touched.
He was predeceased by his parents, Metro and Annie Stefanchuk, brothers, John, Peter and Maurice and sister Mary.
Wally was born in Vita, Manitoba and spent his childhood on the family farm in Stuartburn. After graduating high school, he attended Teachers' College which began a decade's long career in public education. Wally attended the University of Manitoba where he obtained Bachelors of Education and Physical Education. He taught in Fort Garry and in Selkirk, as a classroom teacher, a phys ed teacher and a guidance counsellor. While teaching at Ralph Maybank School, he met and fell in love with a Grade Four teacher named Pat. They were married for 60 years.
A natural athlete, Wally had a great love of sports. In the 1960s, he coached gymnastics, was a national gymnastics judge and served on the original committees that formed the Manitoba Gymnastics Association and the Manitoba Diving Association.
In his retirement years, Wally was a competitive downhill skier and inline skater. At 69, he was the oldest competitor in the Manitoba Winter Games. In his words, "Skiing gives me a reason to stay in condition. Mostly, I compete with myself. But you have to have goals if you are going to train every day. You have to have a purpose for training."
Wally was an incredibly loyal and generous man, someone who showed up to help family, friends and neighbours, often before they even knew they needed help. He was a kind voice of reason who loved watching the news and cheering on the Jets and Bombers as long as they were playing smart. He would never invite you to dinner but simply make the meal and insist you stay.
The family extends profound thanks to the WRHA Palliative Care team, the staff at Riverview Health Centre and to family and friends whose support has been invaluable.
A private Celebration of Life will follow at a later date.
Donations in his memory can be made to Right To Play (righttoplay.ca)