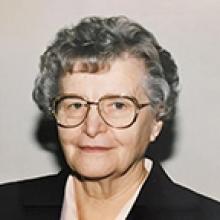 
It is with sadness that we announce the peaceful passing of Frances Penonzek on June 17, 2022 at the grand age of 104. Frances passed away at Christenson Village in Gibsons, BC, where she had lived for the last seven years.
Frances was predeceased by her husband Louis in 1987; daughter Marilyn Sedgwick; parents, Maxim and Lillian Sabeski; sisters, Ann Perozik, Mary Rebenchuk; brothers, Alex, Mike and Matt Sabeski; sons-in-law, Kent Sedgwick and Ron Thorpe.
She is survived by her daughter Gail Thorpe of Penticton, BC and sons, Larry and wife Diane of Gibsons, BC, Florian and wife Margaret of Harrison, BC and Allan and wife Yvonne of Winnipeg; eight grandsons; one granddaughter; numerous great-grandchildren; brother Adolph Sabeski and wife Deanna of Winnipeg Beach.
Frances was born Frances Sabeski in the Municipality of Rossburn, Manitoba on January 17, 1918. She married Louis Penonzek in 1939 and farmed in the Angusville area. From 1942 to 1957 they lived in Russell then moved to Erickson, where they owned and operated the Erickson Hotel. In 1969 they moved to Winnipeg. After Louis's passing, Frances remained in Winnipeg until 2013 when she moved to Gibsons, BC.
A service will be held on July 8 at Christ the King Catholic Church, 847 Saint Mary's Road in St Vital with viewing at 11:00 a.m. and Mass at 11:30 a.m. Interment will follow in Glen Lawn Memorial Gardens, beside Louis.