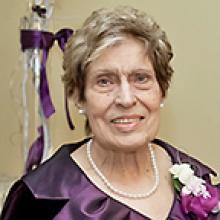 
It is with deep sadness that we announce the passing of Georgina Tuck (nee Gaczynski) on July 15, 2022, with family by her side.
Georgina was born December 11, 1935 to parents Antoni and Anna (nee Choma), who immigrated to Canada from Poland and Ukraine in the 1920s. Georgina was a beloved daughter, wife, mother, grandmother, great-grandmother, aunt, and friend. She is survived by her children, Bob (Sherry), Keenan, Cheryl (Lawrence), and Gary (Maria), grandchildren, Amy (Paul), Tania, Kirstin, Danielle (Brandon), Justin, and Angela, great-grandchildren, Arianna, Tucker, Ainsley, Victoria, Newry, and Weston. Georgina was predeceased by her parents, her husband Bob, sister Emily Greenaway, and nephew Richard Slezack.
Georgina (better known as Jinx and Aunty Jinx) was born and raised in Winnipeg's North End. First attending King Edward School and then finishing at Isaac Newton High School. She was a beautiful person inside and out. While she may have been quiet and reserved, her sense of style and warming smile were hard to miss and we're sure that's what instantly attracted Bob when they met. They married in 1956 and started their family in 1958. After living briefly in the North End and St. Boniface, they moved to St. Vital in 1966, where they settled and watched their family grow through the years.
Before having children, Georgina worked at the unemployment office and after raising their four children returned to work at St. Amant Centre, followed by the Assiniboine Credit Union, and finally retiring from Cambrian Credit Union.
She enjoyed the time spent with family and friends in their Sunday and Thursday night 10 pin bowling league at Chateau Lanes. She kept her mind sharp until the end by being a voracious reader, cross-word, and sudoku enthusiast. She believed it was never too late to learn and proved this by going back to school in her late 50s to learn about computers. She loved to cook and try new recipes, a characteristic that lives on in her children. Christmas wasn't complete without her famous stack cookies or walnut crescents; whatever she baked we loved. In her later years, she enjoyed the casino and bingo trips with her sister-in-law Joan but her greatest love was her family, especially her grandchildren and great- grandchildren. The love and support she gave was immeasurable and vast, unable to be replaced, and it will live on through precious memories.
The family would like to thank the wonderful staff at the St. Boniface Hospital Palliative Care.
In lieu of flowers, donations can be made to CancerCare Manitoba or an animal rescue of your choice.


Family and friends may sign a
book of condolence at www.glenlawn.ca.
Glen Lawn Funeral Home
204-982-7550