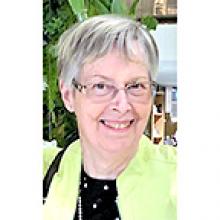 
The family of Elizabeth Harrison (née McFarlane) of Deep River, Ontario is saddened to announce her passing on July 18, 2022, at the age of 78. She will be lovingly remembered by her children, Glenn Harrison (Mary Jeanne Phelan) of Montreal and Dawn Scott (Glen Scott) of Winnipeg, her brother Bruce McFarlane (Renata) of Creston, B.C., her grandchildren Kasja-Dawn Scott (Will Lamoure), Andrew Scott, William and Riley Harrison, and her nephews Matthew and Stuart McFarlane. She was predeceased by her brother Murray McFarlane and her parents Bill and Betty McFarlane (née York).
Born on July 9, 1944, Liz grew up in Montreal's NDG neighbourhood and spent summers in Rivière Beaudette. She graduated from Westhill High and McGill's Macdonald College before moving to Winnipeg in 1965 to raise her family and start a long and successful career with ISM, working her way up the corporate ladder starting from punching key cards to retiring as vice president of human resources in 1995. In her spare time, when not wielding her extensive crafty skills, she was a fixture at the Charleswood Curling Club and, over many years, deeply involved in organizing the Scotties Tournament of Hearts and the Brier. In later years, she was a doting grandma to her four grandchildren whom she adored. Liz was an avid golfer and reader, had a wonderful circle of friends, and made many new ones after her move back east to join her daughter's family in Deep River, Ontario in 2011. There, she continued to stay active in curling, golfing, and participating in exercises and outings with the Seniors Friendship Club. She enjoyed long walks by the Ottawa river and chats with acquaintances along the way. Liz will be greatly missed by all her friends.
A Celebration of Life will be held in Deep River at a later date. In lieu of flowers, donations to the Deep River Public Library in memory of Liz would be gratefully appreciated.