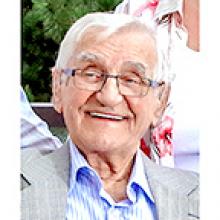 Walter Curry, 97, passed away peacefully on Sunday, July 24, 2022 at Holy Family Home.
He was preceded in death by his wife Jean in 2001. Walter is survived by his 6 children: Bernadette, Patrick (Donna), John (CJ), Michael (Laurel), Monica (Fabian) and Christopher; fourteen grandchildren, David, Lisa (Michael), Paul (Trista), Jonny, Brian (Diana), Greg, Ryan, Michael (Alicia), Matthew, Sarah (Jeremy), Janelle, Delaney (Lara), Nicholas (Ellen) and William; and 6 great-grandchildren, Jerni, Abigail, Jack, Serena, Sebastian, Eli and Sophia.
Dad was born in Poland on July 23, 1925. When he was 3 years old his family immigrated to Canada and settled in McCreary, MB where they farmed wheat and later opened a flour mill. At age 18, Dad enlisted in the Royal Canadian Navy during the Second World War. He was always proud to have served his adopted country. While stationed in Charlottetown, PEI, during the war, Dad met Jean, a beautiful nurse who became the love of his life. They were married on August 19, 1947, in Charlottetown, PEI, and then moved to Manitoba to begin their life together. After arriving in Manitoba, Dad and Mom worked at his family's hotel in Whitemouth, MB and then moved to Winnipeg after their first child, Bernadette, was born. In Winnipeg, Dad got a job as a local truck driver, eventually becoming an owner-operator driver for Manitoba Cartage. Dad worked in trucking until he started his company, Curry Industries, Ltd., in 1969. Dad was a creative mechanical designer with several successful patents. His patented products are used in environmental research, agriculture, and horticulture. Caring for the environment meant a great deal to Dad. He took great pride in his company's involvement with fresh-water research.
A Memorial Service will take place at St. Alphonsus Church, 315 Munroe Ave., East Kildonan, Winnipeg on Thursday, August 4, 2022, at 11:00 a.m.